Do You Want Milk with Magazines?

Update Required To play the media you will need to either update your browser to a recent version or update your Flash plugin.
By Christopher Cruise
04 October, 2014


The United States Postal Service wants to bring food and other goods from grocery stores to American homes. Officials say the transport of groceries may help reduce the amount of money the postal service is losing. The organization is an independent agency of the federal government. It has lost billions of dollars over the past six years as Americans send less mail.

Last week, the Postal Service asked the Postal Regulatory Commission for permission to test its plan beginning in late October. The tests would last for two years. If it proves successful after that time, or even before, the postal service could offer the program permanently.

Under the program, grocery stores would bring cooled containers of food and other products to post offices between 1:30 and 2:30 in the morning. Postal workers would then deliver these packages to homes between three o'clock and seven o'clock in the morning. That is a period when few postal vehicles are being used. People do not have to be awake when the packages arrive. 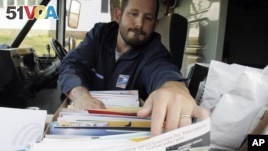 In this 2011 file photo, a U.S. Postal Service letter carrier Terry Caldwell, of Topsham, Maine, reaches for mail while on his delivery route in Bath, Maine. The USPS wants to bring food and other goods to American homes.

The postal service noted that grocery delivery services "are expanding across the nation." And it says offering such services is, in its words, "likely to contribute to the financial stability of the postal service by generating more package deliveries."

Postal Service officials did not announce the cost of the delivery services. The postal service says the test program will help it decide how much people should pay. And it did not note where the tests would take place or which companies it would partner with. The postal service has already been working with Amazon to deliver food and other goods early in the morning in the San Francisco, California area.

The American Postal Workers Union represents employees who work in post offices and mail processing centers, drive large trucks and repair buildings and equipment. It does not represent mail carriers. A union official told VOA that the union is studying the postal service plan. The official said "we generally enthusiastically embrace the postal service offering more services." She said that, in addition to offering grocery deliveries, the postal service should offer banking services. She noted that millions of Americans do not have bank accounts.

The Washington Post newspaper reports the postal service has been creating partnerships with private companies for some time. In November, it agreed to let Amazon ship packages on Sundays at the same cost as weekday shipping. And the postal service said it would open 82 postal centers at Staples office supply stores throughout the country.

This story was reported by VOA correspondent Christopher Cruise in Washington. He also wrote it for Learning English. George Grow edited it.

groceries – n. food sold by a grocer; food bought at a store. "She stopped to pick up some groceries for supper."

independent – adj. not influenced by or controlled by another or others; free; separate

container – n. an object (such as a box or can) that can hold something

package – n. a box or large envelope that is sent or delivered usually through the mail or by another delivery service. This word is mostly used in the United States; in other places, the word that would be used is "parcel."