Potato Grown in New Zealand Could Be Largest Ever

Update Required To play the media you will need to either update your browser to a recent version or update your Flash plugin.
By Dan Friedell
07 November 2021


Colin and Donna Craig-Brown were working in their New Zealand garden in late August. They were removing unwanted plants when they found something strange.

After a little digging, Colin discovered there was a very large potato growing in his garden. And they did not even plant potatoes!

How large was the potato?

"We couldn't believe it," Donna said. "It was just huge."

The couple worked the potato out of the soil and brought it to a scale.

That's about the same as a small dog.

The potato may be the largest ever recorded. 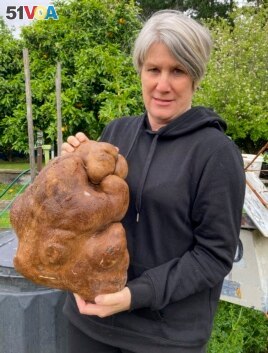 Guinness keeps a list of world records. In 2011, a large potato from Great Britain weighed just under 5 kilograms. The New Zealand potato, now named Doug, could break the record.

The Craig-Browns asked Guinness to recognize their potato as the largest ever. They are waiting to hear back from the organization.

The potato has become famous in the town of Hamilton. Colin built a small cart to take Doug on walks around the neighborhood.

"We put a hat on him. We put him on Facebook, taking him for a walk, giving him some sunshine," Doug said. "It's all a bit of fun. It's amazing what entertains people."

Colin said he does not have any special gardening methods to pass on. Normally, he and his wife fertilize their garden with waste from cows and dried grasses. The Craig-Browns were growing cucumbers in that part of the garden, so they were surprised to find a potato. It may have been growing for two years or more.

The potato is getting a little old now, two months after it was taken from the ground. It smells bad. Right now, it is in the freezer.

But it might not stay that way forever. Colin said Doug's future may be as the main ingredient in alcohol.

Dan Friedell adapted this story for Learning English based on a report by Nick Perry of The Associated Press. Susan Shand was the editor.

Have you ever found an unexpected vegetable growing in your garden? Tell us in the Comments Section and visit 51VOA.COM.

garden– n. an area of ground where plants (such as flowers or vegetables) are grown

scale – n. a device that is used for weighing people or things

cart – n. a small wheeled vehicle that is pushed or pulled

fertilize – v. to make (soil, land, etc.) richer and better able to support plant growth by adding chemicals or a natural substance (such as manure)

cucumber – n. a long vegetable with dark green skin and crisp flesh that is often used in salads or for making pickles

freezer – n. a device or room for freezing food or keeping it frozen