Power Out in Crimea After Lines Blown Up


Crimea is trying to restore power after two of its main electricity lines were blown up Sunday.

By late Sunday, power was restored to more than a quarter of Crimea's 2 million residents. Most of those who got power back live in urban areas of Crimea.

But even in places where power was brought back, water supplies to high-rise buildings remained blocked. So was access to cable and the Internet. 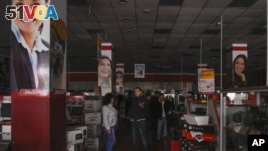 Customers are seen standing in an electronics store after a power failure, in Simferopol, Crimea, Nov. 22, 2015.

A state of emergency declared by Crimean leaders remained in effect on Monday.

Efforts to fix downed power lines were blocked late Sunday by pro-Ukrainian activists. Crimea depends on power lines and towers in Ukraine for 70 percent of its power.

Ukraine's UNIAN news agency first reported Friday that two of four main power lines to Crimea had been damaged after an explosion. Police in Ukraine say they do not know who is responsible.

Ukrainian police surrounded a group of activists near the downed power lines over the weekend. Some of those trying to block repairs backed off after clashes with police, police said.

The vote came after pro-Western protests in Ukraine forced the resignation of President Viktor Yanukovych. He was close to Russian President Vladimir Putin.

After the annexation, sanctions were imposed by western governments. There have been regular clashes between supporters of Russia and pro-Ukrainian forces.

Nearly 8,000 people have lost their lives in the clashes, according to a United Nations report in September.

We want to hear from you. Write to us in the Comments Section or comment on our 51VOA.COM.

restore - v. to return something; to re-establish something

quarter – n. one-fourth of something

residents – n. people who live in a given area; citizens

annex – v. to take control of (a territory or place)

annexation – n. to add territory to a nation