Update Required To play the media you will need to either update your browser to a recent version or update your Flash plugin.
By VOA
03 May, 2019

Officials said Cyclone Fani had winds up to 200 kilometers an hour when it struck the seaside state of Odisha Friday morning.

The storm spent days building up strength in northern waters of the Bay of Bengal before making landfall. 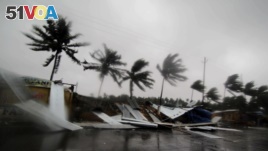 Street shops are seen collapsed because of gusty winds preceding the landfall of Cyclone Fani on the outskirts of Puri, in the Indian state of Odisha, May 3, 2019.

The storm heavily damaged the coastal town of Puri. Most of the area's thatched-roof houses were destroyed. The road into Puri was blocked by fallen trees and downed electricity lines. A special train ran Thursday to evacuate visitors.

To the north, in West Bengal state, the airport in the capital Kolkata was closed from Friday afternoon to Saturday morning.

At least 200 trains were canceled across India.

The latest storm hit in the middle of India's six-week general election. The weather caused political parties in Kolkata to cancel campaign events.

Officials in Bangladesh suspended the activity of ships in the country, which has about 130 rivers. Local media reports said water began flowing into at least 10 villages in coastal Patuakhali district in southern Bangladesh. The reports said the force of the cyclone caused flood barriers to break.

Aid agencies warned that more than 1 million Rohingya from Myanmar living at refugee camps near the coastal district of Cox's Bazar were at risk. A representative for the aid group CARE said it had emergency supplies ready for the refugees.

India's cyclone season can last from April to December. In the past, several severe storms caused widespread damage and numerous deaths in both India and Bangladesh. But technological developments over the years have helped officials better predict storm activity and take necessary steps to prepare.

cyclone – n. a violent storm with very strong winds that move in a circle

evacuate – n. to move people from a dangerous place to somewhere safer

thatched-roof – adj. a roof made of natural materials such as straw and mud