Update Required To play the media you will need to either update your browser to a recent version or update your Flash plugin.
By VOA
21 January, 2017


"Fake news" stories have been a major issue in recent months.

Some Americans say fake news influenced the 2016 presidential election in the United States. Supporters of candidate Hillary Clinton claim the spread of such stories on social media cost her the election. And, a November 2016 study from Stanford University suggested young people have great difficulty identifying false claims from real ones.

But social media and the internet are not the only providers of questionable information. 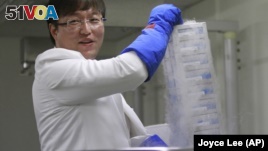 College professors and students spend years researching subjects, hoping to share their information with others and push knowledge forward. Once they complete their research, they publish this information. Researchers usually seek out academic journals to publish their findings, or present them at conferences.

A company called OMICS International is an online publisher of academic journals. Its website says OMICS International operates more than 700 journals, with help from over 50,000 experts. It says that OMICS organizes thousands of conferences around the world each year.

Yet it is not clear on the site that the U.S. Federal Trade Commission (FTC) is taking legal action against OMICS. In August 2016, the FTC accused the publishing company of unlawful business activities. First, an FTC statement claimed the company lied to researchers about publishing costs. The government claimed OMICS let researchers submit their papers for free, then later demanded money.

The FTC also claims the company has refused to remove papers from the website unless researchers paid. This prevented the researchers from publishing their findings in other journals.

Additionally, the FTC claims OMICS falsely listed the names of guest speakers at its conferences. This, the FTC says, was in hope of getting other people to willingly pay the fee of $1,000 or more to attend.

Srinubabu Gedela says he created OMICS in 2007 with the hope of freely sharing scientific knowledge with the world. OMICS International says it follows the open access model of publishing. This means anyone can read its publications free of charge.

Gedela says FTC officials cannot charge him with anything unlawful because they mistakenly have him on record as a permanent U.S. resident. Gedela says he is a resident of India. He also argues the government is taking action in an attempt to stop the success of open access publishing.

"All the [FTC accusations have] done [is a] matter of making [accusations] without any valid documentary evidence, just to kill the open access publishing," he says. "Further, I understand that [the] FTC [is] working towards favoring some subscription-based journal publishers who are earning billions of dollars from scientists' literature."

The traditional model of publishing academic journals is known as the subscription model. In this model, publishers cover costs and can also make a profit by charging a monthly or yearly fee. That way, researchers can offer their work free of charge. Also, a university library paying the fee then has use of the information in the journals.

Jeffrey Beall says he has heard the argument of subscription-based publishers trying to kill open-access publishers before. Yet he does not believe it.

Beall is an academic librarian at the University of Colorado in Denver. He has 26 years of experience in his field. Beall says there are many problems with journals like those OMICS publishes. He thinks the subscription model is better at identifying questionable journals and dealing with them in the best way possible.

Beall notes the most important part of publishing research is the peer-review process. This is when experts in the same field, often having never met the researcher, examine the research for mistakes. This ensures the research is not only understandable, but also completely real, he says.

But Beall argues low-quality journals are only interested in money from submission fees. To keep researchers submitting papers, these publishers often avoid the peer-review process. Or they choose experts without the necessary knowledge, he says. And they also lie about how many other academics read their journals.

It is not always easy to tell which journals are legitimate -- following accepted rules -- and which are not. So in 2011, Beall began creating an online list of journals and other academic groups he calls predatory. The list was discontinued in early 2017.

He admits his decisions to list a journal are based on his subjective opinion. But Beall says he uses many different ways to rate these journals. Often they offer a quick peer-review process, which he says is impossible.

Another sign is a large number of spelling or grammar mistakes on a journal's website. This can make it harder for researchers whose first language is not English to identify predatory journals, Beall says.

Professor Peter Dreier notes that even legitimate journals and conferences have their problems. Dreier teaches politics at Occidental College in Los Angeles, California. He says academic writing has become so complex that sometimes even fellow experts cannot understand it. This sometimes leads to peer-reviewers approving submissions they otherwise would not, simply because the writing appears scientific.

To prove this, Dreier submitted a paper to a conference of the Society for Social Studies of Science held in 2010. Dreier says the submission he wrote was complete nonsense, and the conference accepted it.

Dreier warns of two major dangers. He says it is the duty of researchers to increase knowledge in the world. But if they write in a way only other researchers understand, that knowledge will only help the highly-educated. Also, if journals knowingly publish bad research because they seek profit, the value of knowledge decreases.

Dreier uses fake news as an example. He says in the past people trusted the established news media. But as more fake news is published, people stop believing things they see or hear in the news. And people must understand that some things are real and some are not, he says.

"The very idea of expertise is in question if people don't trust that there are people that are willing to tell the truth about what's happening in the world -- not just politicians but scientists. If they don't trust them because their ideas have been undermined by the pursuit of profit, then it's very difficult for society to move forward and make progress."

fake – adj. not true or real

journal(s) – n. a magazine that reports on things of special interest to a particular group of people

submit – v. to give a document, proposal or piece of writing to someone so that it can be considered or approved

subscription – n. an agreement that you make with a company to get a publication or service regularly and that you usually pay for in advance

library – n. a place where books, magazines, and other materials, such as videos and musical recordings, are available for people to use or borrow

peer-review – n. a process by which a academic work, such as a paper or a research proposal, is checked by a group of experts in the same field to make sure it meets the necessary standards before it is published or accepted

ensure(s) – v. to make something sure, certain or safe

predatory – adj. wrongly harming or using others for pleasure or profit

subjective – adj. based on feelings or opinions

undermine(d) – v. to make someone or something weaker or less effective usually in a secret or gradual way