Delay Pregnancy After a Miscarriage?

Update Required To play the media you will need to either update your browser to a recent version or update your Flash plugin.
By VOA
26 June, 2012

Miscarriages are generally caused by genetic problems with the baby that prevent it from developing. But whatever the cause, the loss of a pregnancy can be heartbreaking. And sometimes the advice that women receive after a miscarriage can also be heartbreaking.

Some women are told to wait before they try to get pregnant again. A two thousand five report from the World Health Organization advised waiting at least six months. Some doctors advise women to wait even longer. 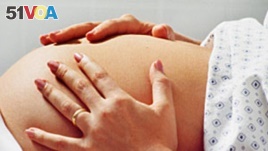 Up to twenty percent of known pregnancies end in a miscarriage
But a Scottish study published in twenty-ten found no need to delay. Researchers from the University of Aberdeen examined the medical records of thirty thousand women. The women visited Scottish hospitals between nineteen eighty-one and two thousand. They had miscarriages in their first known pregnancies and became pregnant again.

The study found that about forty percent of women became pregnant again within six months. Twenty-five percent got pregnant within six to twelve months.

The women who quickly became pregnant again after a miscarriage were more likely to be older. Older women might be less likely to delay because they know there are more risks with pregnancy the older they get.

The twenty-ten report appeared in the BMJ, the British Medical Journal. The researchers pointed out that their results were limited to Scottish records and could not be generalized to all women. For example, women in developing countries start having children at an earlier age than females in Western countries.