Update Required To play the media you will need to either update your browser to a recent version or update your Flash plugin.
By VOA
20 November, 2012

A new report says greater access to family planning methods would save developing countries more than eleven billion dollars a year. The United Nations Population Fund says the savings would come from reduced costs of care for mothers and newborn babies.

These are some of the findings from this year's "State of World Population" report:

Two hundred twenty-two million women in developing countries cannot get birth control or other family planning services. An investment of four billion dollars a year would provide these women with reproductive information to reduce unplanned pregnancies and unsafe abortions.

An investment of about two billion dollars a year would provide enough contraceptives to meet the needs of developing countries. 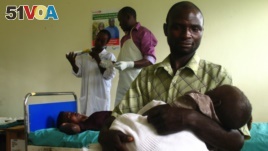 Savio Niwagaba of Uganda holds his newborn baby as his wife Chrisente, behind him, has a contraceptive implant placed in her arm
The report says increased access to family planning is a good economic investment. Having fewer children has long paid a so-called demographic dividend to rich countries in Europe and North America. Population Fund spokeswoman Diane Stewart says one-third of the growth of Asia's "tiger" economies is the result of increased use of family planning services.

"To be able to choose the number of children and when you start having children, so that has dramatically changed the way people live in many countries. They're able to live longer and healthier lives because of family planning, and it also has a positive multiplier effect on development because of the increased savings that are possible within the family and the investment in economic growth that brings about."

Sub-Saharan Africa has some of the biggest unmet needs for family planning services. The report says modern contraceptives are not widely available in countries such as Chad and Niger. But Ms. Stewart says providing contraceptives in developing countries is not enough. There are social, political and legal barriers that prevent access to birth control. In many cultures, women are encouraged to have large families and to avoid or limit the use of contraceptives.

The Population Fund says family planning helps countries reduce poverty. A recent study said Nigeria's economy would grow by at least thirty billion dollars if the fertility rate fell by just one child per woman in the next twenty years.

"There are unmet needs for family planning in every country in the world. And a lot of that has to do with poor, disadvantaged, marginalized groups in many countries who don't have access to the kinds of services and products that they need in order to plan their own families, space their children and prevent unintended pregnancies."