Update Required To play the media you will need to either update your browser to a recent version or update your Flash plugin.
By Andrew Smith
28 August 2022


Serious medical problems connected with pregnancy are rare in the United States. But they still affect thousands of women each year.

Problems with a pregnancy can threaten the health of the mother, fetus, or both. These problems, called pregnancy complications, are more common in Black mothers. The complications may be among the reasons a higher percentage of Black women die from childbirth compared with women of other ethnic groups.

Severe problems may force patients and their doctors to consider an operation to end the pregnancy, or an abortion. In June, the U.S. Supreme Court ruled that states, not the federal government, should pass laws on the issue of abortion. 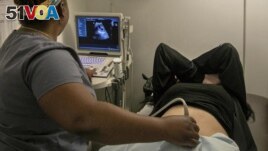 Some doctors have told the Associated Press (AP) that they believe new abortion limits force them to let patients' health complications worsen.

Here are some of the most common pregnancy complications that could lead a doctor to recommend abortion as treatment.

Preeclampsia is high blood pressure that can develop suddenly in pregnancy. It usually happens during the second half of the pregnancy.

The condition develops in about one in 25 pregnancies. Symptoms include swollen arms and legs, headaches and blurred vision.

In addition to high blood pressure, patients can develop kidney or other problems.

Treatment may include hospitalization and medicines to lower blood pressure and support the development of the fetus's lungs. Ending the pregnancy by inducing birth or with an abortion may be recommended when the mother's life is in danger.

An early rupture of membranes is another pregnancy complication. Membranes in the sac that surrounds the fetus sometimes break at the start of childbirth. In at least three percent of pregnancies, the sac breaks too early. Such breaks often lead to birth before the expected date.

The condition increases the chances of infection of the uterus. If the sac breaks before 24 weeks, doctors may recommend ending the pregnancy. This is because infant survival chances are very low before 24 weeks.

Instead of abortion, doctors could monitor the patients and closely watch for signs of infection. This increases the risk of severe maternal complications. Recent studies suggest that the chances of a successful birth are reduced.

A third possible complication is ectopic pregnancy. Ectopic pregnancies are when a fertilized egg grows outside the uterus, often in a fallopian tube. It happens in about 2 percent of U.S. pregnancies.

There is no chance for the embryo to survive. It can cause the tube to burst, leading to dangerous internal bleeding.

Treatment for less severe cases may include chemicals that stop the embryo from growing and end the pregnancy. In other cases, surgery is required, sometimes to remove the affected tube.

Doctors emphasize that treatment for ectopic pregnancies is not the same as an abortion.

Some politicians who are against abortions have suggested that ectopic pregnancies could be put back in the uterus. They have commented on two unproven case reports from medical publications released many years apart. Some experts say an attempt of this kind would damage the embryo and could not result in a successful pregnancy.

The placenta is another kind of pregnancy complication. The placenta is a crucial structure that develops in pregnancy and attaches to the uterine wall. It is connected to the umbilical cord and helps feed the fetus.

In about 1 in 100 pregnancies, the placenta separates too early from the womb. This can happen after about 20 weeks of pregnancy. The condition can present a life-threatening risk to the fetus and can cause dangerous bleeding in the mother.

Inducing childbirth or ending the pregnancy may be recommended.

swollen –adj. Enlarged beyond normal size, often due to an excess of fluid (such as a swollen ankle due to injury).

blurred –adj. not in sharp focus

induce –v. to cause or produce

membrane –n. thin tissue that covers or connects a part of a human or animal body.

sac –n. a part inside the body of an animal or plant that is shaped like a container such as a bag

uterus –n. the organ in the female body where a fetus develops

fallopian tube –n. a tube connecting the ovaries to the uterus

emphasize -v.; to show or state the importance of; to bring more attention to