The Global Problem of Preterm Births

Update Required To play the media you will need to either update your browser to a recent version or update your Flash plugin.
By VOA
03 July, 2012

Premature or preterm births are defined as live births before a woman completes thirty-seven weeks of pregnancy. A new study found that about fifteen million babies were born prematurely around the world in twenty-ten. The study was the first of its kind, and shows that the problem exists in poor countries as well as in wealthy ones.

Researchers gathered information from eighty-four countries. The researchers were from Save the Children, a nongovernmental organization. They found that more than one in ten babies are born too soon. 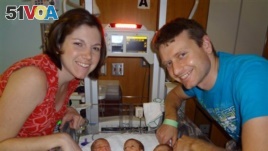 A photo provided by Texas Children's Hospital shows Lauren and David Perkins with three of their six children born prematurely in April
The research team found that fifteen countries -- including the United States and Brazil -- had two-thirds of all preterm births. Sixty percent of preterm births happen in South Asia and sub-Saharan Africa.

Problems related to premature birth are the second most common cause of death in children under five, after pneumonia. The study found that these complications of preterm birth result in more than a million deaths around the world every year.

Babies born early are more likely to develop learning disabilities and problems with their eyesight and hearing. They can also suffer cerebral palsy, a neurological condition, and a lifetime of lung disease. The risk of death in a newborn also increases sharply if babies are born after less than thirty-two weeks of pregnancy.

But eight out of ten premature babies are born between thirty-two and thirty-seven weeks. Joy Lawn of Save the Children in South Africa led the team that wrote the report for the World Health Organization. She says with the right medical care and loving attention, these newborns have a good chance of survival.

JOY LAWN: "They would survive with really basic care. So, being breastfed, being kept warm. And they are at much higher risk of infection, so treating with antibiotics."

She says only five percent of preterm babies were born at twenty-eight weeks or less. Those that survived birth required intensive hospital care.

The research team found that only three countries -- Croatia, Ecuador and Estonia -- had a decrease in their preterm birth rates between nineteen ninety and twenty-ten.

In the United States, twelve percent of all live births in twenty-ten were preterm.

You can find a link to the full report, along with videos about the problem of premature births, at 51voa.com.

This study would have interested Mary Ellen Avery. She was a medical researcher who made a discovery that helped save the lives of many preemies. Next week, learn about Dr. Avery and her discovery more than fifty years ago.