Many places have experienced severe flooding after heavy rains this year. Last Thursday, football lovers traveled through flooded streets in Recife, Brazil to watch the World Cup match between Germany and the United States. Many were unsure if the game would be played at all because of the weather.

Last week, the World Meteorological Organization predicted a return of the weather event known as El Nino later this year. Experts say one sign of it is unusually warm ocean surface temperatures in the central and eastern Pacific. El Nino can affect weather conditions worldwide.

The flooding in Recife followed hours of heavy rainfall. Major flooding hit the former Yugoslavia earlier this year. It killed more than 50 people in Serbia alone.

Michel Jarraud is Secretary-General of the World Meteorological Organization.

"This winter, meaning December 2013 to February 2014, was the wettest winter ever recorded in more than a quarter of a millennium."

Mr. Jarraud spoke at a climate conference in Japan earlier this year. He said there is no question that temperatures around the world are going up.

"Every decade has been warmer than the preceding one over the last 40 years." 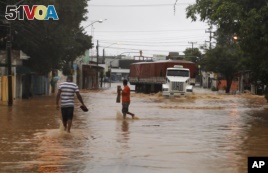 A truck makes it's way down a flooded street after heavy rain storms in Recife, Brazil, Thursday, June 26, 2014.

Philip Klotzbach is an American research scientist. He spoke to VOA on Skype.

The World Meteorological Organization says El Nino is forming again this year. The WMO says the weather event will be fully established in a few months. It is expected to be strongest toward the end of this year and in early 2015. As Michel Jarraud notes, El Nino causes higher than normal temperatures in some parts of the world, and extremely high rainfall in others.

"I am thinking, for example, of the big heat wave which hit Russia in 2010. A lot of research has been done and now the scientists believe that without the climate change, which has already occurred, it would have been very unlikely to occur. So you see, we are making some progress on the attribution of extreme events to climate change."

Scientists have long sought to prove that the release of greenhouse gases, industrial pollution, causes climate change and affects our weather. Mr. Jarraud says there is more and more evidence that this is true. But it is difficult to persuade politicians to take steps to cut pollution.

Kaisa Kosonen is with the environmental group Greenpeace International.

"What does it mean if we want to prevent dangerous climate change? It means that we need to get rid of this coal, gas and oil as soon as possible and change to renewable energy, get more energy efficient systems in place and so forth."

The World Meteorological Organization is urging governments to prepare for El Nino and the extreme weather conditions it can bring.

This report is based on a story from VOA's Zlatica Hoke.