Update Required To play the media you will need to either update your browser to a recent version or update your Flash plugin.
By Bruce Alpert
03 October, 2017


Chances are that today's college graduates will get jobs not directly connected to their majors.

A 2014 study by the Federal Reserve Bank of New York found that only 27 percent of graduates from four-year colleges were working in jobs connected to their college majors.

North Carolina State University is trying to help students face the likelihood that their future jobs will not connect directly to their majors. 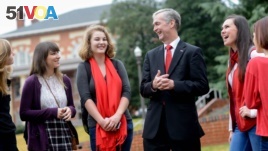 This fall, the university is offering two days of workshops to help 30 juniors and seniors "design their lives." School officials were inspired by a popular class at the Design School at Stanford University in California.

The Stanford class helps students prepare for the future. Among other things, the Stanford professors say they provide "ideas for what the world needs more of."

Braden said he hopes students who take the workshops will feel better about themselves.

"I would say first don't worry that you don't have everything that other people seem to have. I think that there is a real tendency among people of our undergraduates' generation to think everyone else has it all figured out and they don't."

One reason that young people think others are doing better than they are is social media, Braden said.

"On Facebook, you only see what I put up there. You don't see all the private things."

As to advice to students about where the jobs will be, Braden suggests looking toward work that cannot be done by machines or computers.

He also suggests jobs that deal with questions that are a "little fuzzy" to figure out. By fuzzy, he means that finding solutions to problems is not always clear, or when there is more than one possible answer.

She hopes students will look toward "lifelong professional goals."

Unlike their grandparents, today's college graduates are not likely to stay in a job for their entire lives, or even more than five years.

According to the U.S. Bureau of Labor Statistics, the median number of years that workers stay on a job was 4.2 years in January 2016. That was down from 4.6 years in 2014.

"The days of someone working at the same job for his or her entire life are over," Braden said.

What about Liberal Arts majors?

Liberal arts is an area of study that includes literature, psychology, political science, philosophy, sociology and other subjects, including performing arts. Some believe that liberal arts majors will have a hard time finding a job after college -- given the importance of technology.

Not so, says a report by the jobs website Monster.com

It says that liberal arts majors bring skills to jobs in technology, marketing and business operations among others.

"That's because your studies have taught you how to think critically, research thoroughly, and write well—all of which are skills any employer will value," the Monster.com report said.

Braden said that he hears from parents who are worried about their students majoring in liberal arts or humanities. But he recalls asking one of the worried parents what they majored in in college.

"I majored in English, but now I'm in sales," the parent said.

Braden responded: "Okay, thank you, you just proved my point."

By the numbers, the U.S. Census Bureau found that engineering was the major that the produced the highest average salary after graduation, $92,000. The major with the lowest annual salary was visual and performing arts, $50,700.

Bruce Alpert reported this story for VOA Learning English. Hai Do was the editor.

tendency - n. way of behaving or going about something

median - n. the middle value in a series of values arranged from smallest to largest

thoroughly - adv. careful about doing something in an accurate and exact way