Update Required To play the media you will need to either update your browser to a recent version or update your Flash plugin.
By Bryan Lynn
12 July, 2016


President Barack Obama has urged Americans to channel their anger about police shootings and race into a search for peaceful solutions.

Obama spoke in Dallas, Texas at a memorial for five police officers. A gunman shot and killed the men as they were guarding a peaceful demonstration to protest police shootings of black Americans.

Obama attended the memorial with Vice President Joe Biden and former President George W. Bush. It was the 11th time Obama has addressed a community after a mass shooting.

Obama spoke about each of the five officers. He gave examples of their dedication and spoke of their final moments of duty. He praised them for risking their own lives to protect and serve the public.

Nine other officers and two civilians were also wounded in the attack at the demonstration July 7. Hundreds of people had gathered to protest police killings earlier that week of black men in Louisiana and Minnesota.

The gunman in Dallas told police he was targeting white officers. He was killed in an explosion by a law enforcement robot.

Obama called the shootings in Dallas an act of "demented violence" and "racial hatred." He noted that the officers killed were protecting and upholding the constitutional right of protest at the time of their death.

Before his visit to Dallas, Obama placed calls to the families of Sterling and Castile, said an administration spokesman.

Obama also spoke of the men during the memorial.

"But even those who dislike the phrase 'Black Lives Matter,' surely we should be able to hear the pain of Alton Sterling's family."

Unless Americans are willing to "talk honestly and openly" about race, community policing and gun violence, "then we will never break this dangerous cycle," Obama said.

"In the end, it's not about finding policies that work. It's about forging consensus and fighting cynicism, and finding the will to make change."

He said he knows the pain will not soon pass for families and communities in Dallas.

"But my faith tells me that they did not die in vain. I believe our sorrow can make us a better country. I believe our righteous anger can be transformed into more justice and more peace." 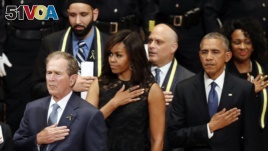 Former President George W. Bush, who lives in Dallas, also spoke at the service. He said "the shock of this evil has still not faded." He urged Americans to remember "shared commitments for common ideals" as a way to overcome differences.

"At times it seems like the forces pulling us apart are stronger than the forces binding us together. Argument turns too easily into animosity. Disagreement escalates too quickly into dehumanization. Too often we judge other groups by their worst examples, while judging ourselves by our best intentions."

Obama and Biden, along with their wives, also met privately in Dallas with families of the dead officers as well as the injured.

Obama is to meet Wednesday with law enforcement officials, activists and civil rights leaders. The discussion is expected to center on ways to repair "the bonds of trust" between communities and police.

Bryan Lynn wrote this story for Learning English based on reporting from VOAnews, with additional reports from the Associated Press and Reuters. Caty Weaver was the editor.

dedication – n. demonstrating strong support or loyalty to a person or cause

despite – adj. without being affected by

in vain – adj. not having success

binding – v. to cause to have an emotional attachment to something or someone

intentions – n. things a person plans to do or achieve