Update Required To play the media you will need to either update your browser to a recent version or update your Flash plugin.
By Bryan Lynn
15 November, 2016


The next president of the United States, Donald Trump, has begun appointing members of his White House team.

The president-elect chose his top two advisers on Sunday. He is expected to name more appointments this week.

Trump chose the national chairman of the Republican Party, Reince Priebus, as his chief of staff. This position generally controls most operations at the White House. The chief of staff also helps set the president's daily activities and decides who gets to meet with him.

The 44-year-old Priebus has headed the Republican National Committee since 2011. His political skills helped elect Trump and resulted in Republicans keeping control of both houses of Congress after the elections last week.

Some observers say the choice of Priebus sends a message to party officials and congressional leaders that Trump is willing to keep ties with the Republican political establishment.

The other top White House job went to Stephen Bannon, whom Trump named as his chief strategist and senior adviser. Bannon served as the chief executive officer of Trump's election campaign. 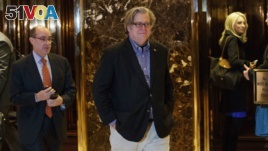 In a statement, Trump called Priebus and Bannon "qualified leaders who worked well together on our campaign and led us to a historic victory." He added: "Now I will have them both with me in the White House as we work to make America great again."

Democratic Party activists, civil rights groups and even some Republicans quickly criticized the choice of Bannon.

Before joining the Trump campaign, Bannon led the Breitbart News website. Under his leadership, the website published stories supporting nationalist, anti-establishment positions. It also had many stories in support of Trump and others critical of Hillary Clinton, the Democrats' presidential candidate.

Bannon once described the news site as a "platform" for what has been called the Alternative Right, or "alt-right." The alt-right means a right-wing movement that publicizes – largely on the Internet – nationalist, racist and sexist ideas.

Breitbart News has been criticized for using news headlines with racist and sexist overtones. One story about a conservative commentator was called "Republican spoiler, renegade Jew." Another headline read "Birth control makes women unattractive and crazy," while yet another asked, "Would you rather your child had feminism or cancer?"

The Anti-Defamation League (ADL) is one group condemning Bannon's appointment. The ADL's director, Jonathan Greenblatt, called it a "sad day" when a man with Bannon's history is chosen to be a senior member of "the people's house."

Greenblatt called on the president-elect "to appoint and nominate Americans committed to the well-being of all of our country's people."

The leading Democrat in the House of Representatives, Nancy Pelosi, said Bannon's appointment sent "an alarming signal that President-elect Trump remains committed to the hateful and divisive vision that defined his campaign."

John Weaver, an adviser for Republican Ohio Governor John Kasich, tweeted that the "racist, fascist extreme right is represented footsteps from the Oval Office. Be very vigilant, America," he wrote. 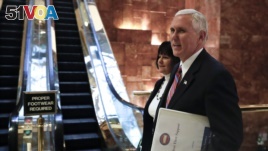 On Tuesday, Trump met with Vice President-elect Mike Pence in New York to discuss other appointments.

Trump campaign manager Kellyanne Conway said his team is also making plans to choose a replacement for Supreme Court Justice Antonin Scalia. Scalia died in February 2016. Since his death, the high court has had eight members, instead of the usual nine.

Bryan Lynn wrote this story for Learning English, based on reports from VOA News, the Associated Press and Reuters. George Grow was the editor.

strategist – n. someone skilled in planning

qualified – adj. having the skills and qualities necessary to perform a job

platform – n. a way to tell the public about your views and opinions

overtone – n. idea that seems to be expressed, but not directly stated

unattractive – adj. not beautiful or interesting

vision – n. the ability to see someone or something

vigilant – adj. – watching carefully for signs of problems or danger