How Much Medical Information Must Presidential Candidates Release?

Update Required To play the media you will need to either update your browser to a recent version or update your Flash plugin.
By Jim Dresbach
14 September, 2016


Recent stories about American presidential candidates have raised questions about how much candidates should say about their medical history while running for office.

In the United States, no law requires presidential candidates or presidents to release medical records or information about their health to the public. But one recent study of likely voters found that 86 percent of those questioned said a candidate's health is important to their vote.

Most presidential candidates are over age 50. This issue affects somewhat younger candidates, too.

John F. Kennedy was the youngest person to be elected U.S. president. He was 43 years old when he won the election of 1960. Kennedy had Addison's disease and back pain that were treated with drugs before he was elected. This information was not released to the public. 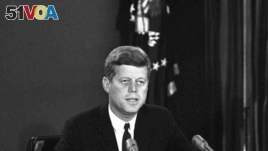 In 1932, Franklin D. Roosevelt was elected president with a clear disability: He had polio. Few photographs survived of Roosevelt sitting in his wheelchair. Late in his presidency, he also suffered from heart disease. The public never heard about his heart problems until Roosevelt died, just months into his fourth term in office.

The U.S. Constitution is clear that once a president has died, the vice president takes office. But questions have arisen throughout American history about what happens when a president is unable to carry out his or her duties, like when under anesthesia. Or the president could be in a coma and unable to communicate.

Following Kennedy's death, Congress passed the 25th Amendment to the constitution. That amendment states, in part, that when a president is incapacitated, the vice president and members of the president's cabinet can act. They can make a formal declaration to the leaders of the Senate and House that the president is unable to carry out his duties.

The vice president then immediately can act for the president.

But the amendment has never been used, even when former President Ronald Reagan was shot in 1981.

President Barack Obama has released reports of his physical examinations periodically throughout his presidency and once during his campaign. He was not legally required to do so. This move has become a tradition for presidents in the years since the passing of the 25th Amendment.

In 2008, Obama defeated U.S. Senator John McCain for the presidency. During the election campaign, McCain released more than 1,000 pages of his medical records to the public. McCain was 72 years old at the time.

Esha Sarai wrote this story for VOANews. Jim Dresbach adapted her report for Learning English. George Grow was the editor.

anesthesia – n. loss of feeling in a person's body or part of the body through the use of drugs

page – n. a written record, the material written on a piece of paper

incapacitated – v. making someone of something unable to work

coma – n. a condition similar to deep sleep; being unable to communicate