Update Required To play the media you will need to either update your browser to a recent version or update your Flash plugin.
By VOA
17 September, 2014


President Barack Obama on Wednesday said the United States would not fight another ground war in Iraq. He commented after a top American general suggested some combat troops could be deployed.

Mr. Obama spoke at MacDill Air Force Base in Tampa, Florida. He said U.S. troops "will support Iraqi forces on the ground as they fight for their own country against these terrorists. ... (But) as your commander in chief I will not commit you and the rest of our armed forces to fighting another ground war in Iraq."

The president added, "American forces that have been deployed to Iraq do not and will not have a combat mission" and airstrikes would be the base of the U.S. effort to fight against the Islamic State.

On Tuesday, General Martin Dempsey, chairman of the U.S. Joint Chiefs of Staff, spoke to lawmakers about the possibility of ground forces deployment in Iraq. 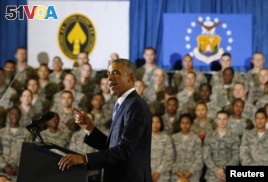 The United States has proposed a discussion with North Korea in connection with three Americans detained in that country. The U.S. is considering sending a special U.S. diplomat to North Korea to secure their release.

The agreements call for setting up an industrial park in Gujarat state. They also would create a sister-city agreement between Ahmedabad, the largest city in Gujarat, and Guangzhou, capital of China's Guangdong province.

Relations between the two have been strained by a long-term border dispute and distrust about each other's military strength.

On Thursday, the people of Scotland will vote on whether to stay in the United Kingdom with England or be an independent country.

So far the opinion polls are evenly divided between the Yes and No vote. And eight to 14 percent of Scotland's 4.3 million voters are still undecided.

detain – v. to keep or hold ("The police detained several

independent – adj. not influenced by or controlled by another or others; free; separate