Update Required To play the media you will need to either update your browser to a recent version or update your Flash plugin.
By Christopher Jones-Cruise
31 July, 2015


President Barack Obama says Africa has made "extraordinary progress." But he says the continent must change its cultures of corruption and discrimination. He spoke last week during his trip to Kenya and Ethiopia.

Mr. Obama visited Kenya in 2006 when he was a United States Senator. But this was his first visit to the place of his father's birth and death since he became president. Many Kenyans called the trip Mr. Obama's homecoming.

Mr. Obama arrived in Nairobi, the Kenyan capital, last Friday. On Saturday, he spoke with Kenyan President Uhuru Kenyatta about trade and security. Mr. Obama said they promised to continue working together against the Somali militant group al-Shabab. 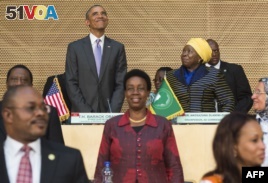 US President Barack Obama (L), alongside African Union Chairperson Nkosazana Dlamini Zuma (R), arrives to speak about security and economic issues and US-Africa relations in Africa at the African Union Headquarters in Addis Ababa, on July 28, 2015.

"On security: the United States and Kenya are already strong partners and today we reaffirm that we stand united in the face of terrorism."

During the Africa trip, the Obama administration said the U.S. would give more than $500 million to help fight extremists throughout Africa.

On Sunday, Mr. Obama spoke to thousands of Kenyans at a sports center. He talked about some of the problems facing the continent. He urged Africans and their leaders to change their political cultures.

"I wanna be very clear here: a politics that's based solely on tribe and ethnicity is a politics that's doomed to tear a country apart. It is a failure. Here in Kenya it's time to change habits, and decisively break that cycle, ‘cause corruption holds back every aspect of economic and civil life."

He noted that the continent had made many changes in the 50 years since many African nations gained independence from their colonial rulers.

"It is long past time to put aside old stereotypes of an Africa forever mired in poverty and conflict. The world must recognize Africa's extraordinary progress."

He became the first U.S. president to do so. He visited a food factory that had been helped by American aid.

He urged Ethiopia's leaders to end restrictions on their political opponents and mass media. The government controls all of the seats in Parliament and limits the country's media.

Mr. Obama said Ethiopia has helped in the fight against al-Shabab and improved conditions for many of its citizens. Ethiopia was once known as a country of famine and drought. But Mr. Obama said millions of Ethiopians no longer live in poverty.

Mr. Obama is the first U.S. president to speak to a meeting of the African Union. He said he was a proud American and a son of an African.

The Chinese government paid for and built the A.U.'s new offices. In his speech, Mr. Obama seemed to criticize China.

"Economic relationships can't simply be about building countries' infrastructure with foreign labor or extracting Africa's natural resources. Real economic partnerships have to be a good deal for Africa. They have to create jobs and capacity for Africans."

Chinese state media said Mr. Obama went to Africa because U.S. officials are worried about China's growing influence on the continent. The English-language Global Times said the United States is no longer "a dominant power in Africa." The Xinhua news agency said the United States has spent billions of dollars on aid for Africa, but the programs "fail to make a big difference."

China is Africa's largest trading partner. It has aggressively worked to strengthen ties with the continent in the past few years. China has made tens of billions of dollars in loans to African nations since 2006. And it is spending $24 billion to develop a port in Kenya.

Christopher Jones-Cruise wrote this program for VOA Learning English. It was based on stories from VOA reporters Aru Pande, Vincent Makori, Arash Arabasadi and Gabe Joselow in Nairobi, Anita Powell in Addis Ababa and Chris Hannas and Carol Guensburg in Washington. George Grow was the editor.

discrimination – n. the practice of unfairly treating a person or group of people differently from other people or groups of people

homecoming – n. the act of returning to your home or to a place that is like your home

reaffirm – v. to formally state (something) again in order to emphasize that it is true

extract – v. to get (a substance) from something by the use of a machine or chemicals

Did you see President Obama in Africa? We want to hear from you. Write to us in the comments section.