Update Required To play the media you will need to either update your browser to a recent version or update your Flash plugin.
By VOA
24 February, 2014

President Barack Obama signed a new Farm Bill into law this month. Under the legislation, the federal government will no longer guarantee automatic payments to farmers. Critics say the law replaces the old payment system with new assistance that may violate international trade rules. The law also includes changes in how the United States helps hungry people around the world. 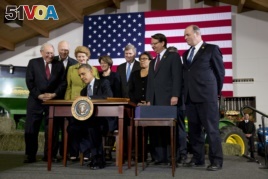 The new Farm Bill ended $5 billion a year in automatic payments to farmers. The president said the law sends a message to people who have abused the system.

"This bill helps to clamp down on loopholes that allowed people to receive benefits year after year whether they were planting crops or not. And it saves taxpayers hard-earned dollars by making sure that we only support farmers when disaster strikes or prices drop," the president said.

The new legislation expands programs that protect farmers from bad weather or low crop prices. It raises the lowest price growers will be paid for some crops. And it offers a taxpayer-supported insurance program to farmers, the program guarantees that their wages do not drop much from year to year.

Dan Sumner is an economist with the University of California, Davis. He told VOA on Skype that the new Farm Bill could cause problems.

"That's the kind of assurances that the U.S. government is willing to provide that most farmers in the world, in fact, don't have access to," he said.

He adds that with the help of the government, American farmers can produce and export more crops, but he warns that could hurt crop prices.

"That drives down world prices and it's a little tougher for farmers in developing countries to compete with that," Sumner said.

But groups representing growers say trade rules do let governments pay a limited amount of subsidies to farmers. Dale Moore is the chief of policy at one of those groups - the American Farm Bureau Federation.

"We're pretty confident that it would take an extremely bad situation for us to even come close to violating those particular limits, something the United States hasn't come close to in years," said Dale Moore.

Other changes in the Bill should help food aid get to more needy people around the world.

"Not only will that save money, but it will help reach people faster. The actual program of buying locally is a much quicker response than buying food from the United States and shipping it," said Eric Munoz.

He told VOA on Skype that with the same amount of money, help can now reach more hungry people.