Update Required To play the media you will need to either update your browser to a recent version or update your Flash plugin.
By VOA
27 July, 2015

President Barack Obama has urged the government in Ethiopia to give more freedom to reporters and opposition political parties. The ruling party controls all of the seats in parliament and limits reporting from the media.

Mr. Obama added Ethiopia's strong economy has helped bring millions of people out of poverty. And he said the country has helped fight the Somali militant group Al-Shabab.

The president spoke in a joint news conference with the Ethiopian prime minister in Addis Ababa. He is also in the Ethiopian capital to meet with leaders of the African Union to discuss the civil war in South Sudan. 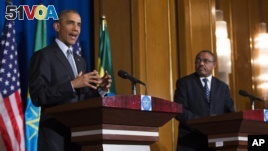 The U.S. is supporting Turkey's air and artillery attacks on Kurdish rebels in Iraq along with Islamic State militant targets in Syria.

On Sunday, the Obama administration said Turkey had the right to attack terrorist targets. And it agreed with Turkey that the Kurdish Workers' Party, or PKK, is a terrorist organization.

Last week, Turkish forces had attacked a town in northern Iraq controlled by the PKK. It was the first attack on the group since a peace agreement was reached in 2013.

The Shanghai stock market index dropped sharply on Monday. The drop of 8.5 percent was the biggest drop of the index since 2007.

The sell-off of Chinese stocks continued despite earlier attempts from the Chinese government to calm the markets. Last month, shares of Chinese companies dropped 30 percent for a loss of more than $3 trillion.

Fighting continues despite truce in Yemen

Saudi Arabia stopped its airstrikes in Yemen on Monday. A five-day-long truce is planned. However, ground fighting continues in some areas after Houthi rebels rejected the cease-fire.

The coalition that has been fighting the Iranian-supported Houthi Shi'ite rebels with air attacks for the past four months declared the truce to let emergency supplies be shipped into Yemen.

The U.S. special diplomat to the six-nation talks on North Korea's nuclear program is meeting with officials in South Korea, China and Japan. They may try to restart negotiations with North Korea aimed at ending its nuclear program.

In Seoul on Monday, Sydney Seiler said the United States is ready to negotiate with North Korea to limit its nuclear activities in exchange for an end to economic restrictions.

index – n. a number that indicates changes in the level of something (such as a stock market) when it rises or falls

sell-off – n. the sale of a large number of stocks or shares that causes their price to drop

negotiation(s) – n. formal discussions between people who are trying to reach an agreement