Update Required To play the media you will need to either update your browser to a recent version or update your Flash plugin.
By VOA
09 November, 2012

Early Wednesday, Mr. Obama noted deep political differences in the country. But he said Americans share certain hopes and dreams. He said they rise or fall together as one nation and one people. 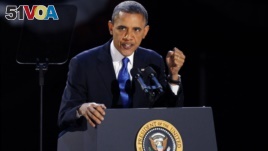 Obama / 2012 Victory
The president won re-election with the same coalition of voters he had in two thousand eight: women, ethnic minorities and young people. Historian Allan Lichtman says Mr. Obama profited from these groups this year.

"Women and minorities put Barack Obama over the top, and there should be a big, huge red-letter warning sign for Republicans that they can't win just with their white Protestant base. We are increasingly becoming a non-white nation."

Alan Lichtman and other observers understand the changes in America's growing population. When Ronald Reagan was elected president in nineteen eighty, whites made up eighty-five percent of the electorate.

This year, polling information showed that seventy-two percent of all voters were white. Thirteen percent of those voting were African-American – the same percentage as four years ago. The Hispanic vote grew from nine percent in two thousand eight to ten percent this year.

Asian-Americans are a fast growing population in the United States. Yet they made up just three percent of the electorate.

Of those asked, ninety-three percent of African Americans reported voting for President Obama. Seventy-one percent of Hispanics said they supported him. Studies also found that over seventy percent of Asian Americans voted for Mr. Obama.

The president is facing a number of difficult issues as he prepares for his second term. They include the size of the federal budget deficit.

Mr. Obama and Congress will have to bury political differences to solve what is being called "the fiscal cliff." In his first official speech since being re-elected, the president said he is calling on congressional leaders for talks at the White House next week. They will discuss how to avoid the required spending cuts and tax increases that would affect all American workers on January first.

"What the American people are looking for is cooperation, their looking for consensus, they're looking for common sense. Most of all they want action. I intend to deliver for them in my second term. And I expect to find willing partners in both parties. So let's get to work."

In the elections Tuesday, Republicans lost a few seats in the House of Representatives, but not enough to lose their majority. Mr. Obama's Democratic Party still controls the Senate.
Related Articles
go top