Update Required To play the media you will need to either update your browser to a recent version or update your Flash plugin.
By VOA
16 October, 2015

Jim Schoff is an expert with the Carnegie Endowment for International Peace Asia Program. He says the meeting is about setting a strategic direction for the next five to 10 years.

Mr. Schoff said South Korea's relationship with China and how that relationship "can be beneficial to the alliance" going forward will be subjects for the talks. He said the two leaders might discuss the entry of THAAD, or Terminal High Altitude Area Defense, missiles should North Korea continue to increase its missile capabilities.

On Thursday, President Park spoke with the Center for Strategic and International Studies in Washington. She told those attending that she would be open to a meeting with Japanese Prime Minister Shinzo Abe. Such a meeting could help improve relations between the two countries.

She also said an upcoming three-way summit of Northeast Asia's leading powers might be an opportunity for a formal meeting with Mr. Abe. "I do feel I can have such a meeting with him," Ms. Park said.

She expressed hope that such a meeting would lead to progress on the issue of comfort women. They are Korean women who were kept as sex slaves by the Japanese Imperial Army during World War Two. 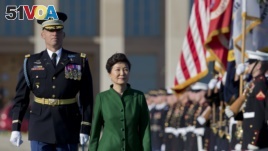 South Korean President Park Geun-hye reviews the troops during a full military honors parade to welcome her, Thursday, Oct. 15, 2015, at the Pentagon.

South Korea has sought an apology and compensation for surviving Korean victims.

The U.S. Defense Department held a rare "Full Honor Parade" for the South Korean president on her arrival at the Pentagon Thursday. This comes after President Park attended a Chinese military parade last month, causing concerns about South Korea's growing relationship with China.

The visit to the Pentagon was seen as a strong symbol of the close ties between the U.S. and South Korea.

Carla Babb reported this story for VOA news. Mario Ritter adapted it for VOA Learning English. Hai Do was the editor.

apology –n. a statement saying you are sorry about something; an expression of regret for having done or said something wrong