US Candidates Talk about Faith, Religion

Update Required To play the media you will need to either update your browser to a recent version or update your Flash plugin.
By Bruce Alpert
13 February, 2016


Candidates for president are talking a lot about their religious beliefs.

Senator Ted Cruz, a Texas Republican, recently asked New Hampshire supporters "to commit to lift this country up in prayer each and every day from now until the election."

Cruz is a Southern Baptist.

And when Senator Marco Rubio, a Florida Republican, was asked recently about fixing America's problems, he, too, spoke about religion. 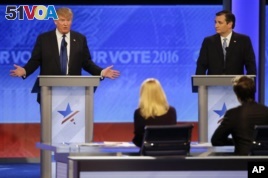 "There's only one savior, and it's not me," Rubio said. "It's Jesus Christ who came down to Earth and died for our sins."

Businessman Donald Trump, another Republican presidential candidate, recently put up a video on Facebook showing the Bible his late mother had given him.

"It's just very special to me," Trump said.

Candidates talking about how religious beliefs will guide them is a big change from 1960. That year, Democrat John Kennedy won the presidency after telling voters his Catholic religion would not affect his decisions as president.

American democracy was founded on freedom for individuals to speak, write and worship as they like. "Religion and government will both exist in greater purity, the less they are mixed together," wrote James Madison, 4th president of the United States.

Robert Schmuhl, a professor of American Studies at Notre Dame University said: "Today we see candidates stressing their religious beliefs as part of their campaigns."

A report last month by the Pew Research Center might explain why.

Pew found that 51 percent of Americans say they are less likely to vote for a candidate who does not believe in God. Not believing in God is viewed by voters as worse than having a relationship outside of marriage, Pew said.

All the Republican presidential candidates are Christians, as is Clinton. Sanders is Jewish.

Sanders does not often talk about religion. He has said he is not active in any organized religion.

But at meeting with New Hampshire voters, he said, "I would not be running for president of the United States if I did not have very strong religious and spiritual feelings." He said his faith makes him care deeply about people who do not earn enough to afford college, health care or feed their families.

At the same meeting, Clinton was asked how she finds balance in her life. The question came from a rabbi, who said a president must balance confidence with wisdom.

Clinton said her Methodist faith and help from clergy keeps her balanced.

"I get a scripture lesson every morning from a minister that I have a really close personal relationship with. And, you know, it just gets me grounded," Clinton said.

Cruz and Rubio talk about their Christian beliefs more than most other candidates.

One reason they did not do as well in New Hampshire as in Iowa: Thirty nine percent of Iowa voters say they are very religious, compared to only 20 percent in New Hampshire. This information comes from a study last week by the Gallup organization.

Not everyone is happy with all the religious talk in the 2016 presidential race.

"Are Ted Cruz and Marco Rubio running for president or pastor?" asked writer Steve Chapman of the Chicago Tribune.

Chapman said the United States Constitution requires separation of church and state, and the government should not be guided by religion.

Obama has criticized Donald Trump over Trump's views about Islam. Trump said he would stop Muslims from migrating to the U.S. because he fears they would bring terrorism.

commit – v. to make (someone or something) obligated to do something

savior – n. coming to the rescue

sin – n. an action that is considered to be wrong according to religious or moral law

Bible – n. a book of sacred writings. Christians use the New Testament. Jews use the Old Testament.

stress – v. special importance or attention that is given to something