Update Required To play the media you will need to either update your browser to a recent version or update your Flash plugin.
By Mario Ritter Jr.
20 November 2021

Kast and Boric are widely considered to hold extreme political positions: Kast as a conservative, Boric as a liberal.

The vote is the first presidential ballot in Chile since a civil uprising began in 2019 over economic inequality. Demonstrations as well as riots took place for months. Two years later, an effort to rewrite the country's constitution is in process. 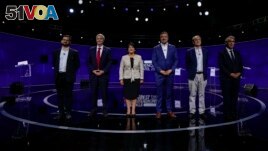 Chile has been a democracy for more than 30 years following the military dictatorship of General Augusto Pinochet. Generally moderate political parties have led the country. Chile has experienced so much economic growth that it is seen as the model to follow in South America.

Political observers say the decision Sunday could shake that image.

Nicholas Watson is a Latin American expert with the advisory business Teneo. He said the election represents the most important political "shift" since 1990. Public opinion studies suggest that neither Kast nor Boric will have enough votes to win the election. But they are expecting to win enough to face each other alone in a second part of voting.

Both represent a new political generation outside the mainstream. Parties have long been considered center-left or center-right, meaning they propose moderate policies.

Boric has said he wants to "bury" Chile's political model. Kast, who has praised Pinochet's economic policies, wants to reduce the size of the government and lower taxes.

In Latin America, Chile stands out.

World Bank measurements on the rule of law, regulation, governance and political stability in Chile place it as stronger than its big neighbors: Brazil, Argentina, Colombia and Peru. It is a member of the Organization for Economic Co-operation and Development (OECD) and considered a model of free trade.

Its economic model is rooted in market policies of Western economists under Pinochet in the 1970s and 80s. It has been copied by others. They hoped to reproduce Chile's stable economic growth.

But, critics of the model say that growth was not evenly spread. They say it created a few rich business leaders above normal Chileans. And they say Chileans have paid high costs for private healthcare and education and receive little retirement pay.

More mainstream candidates, such as Yasna Provoste on the center-left and Sebastian Sichel on the moderate right have gotten less attention from voters.

"Chile urgently needs change today," said 37-year-old Luz Vergara, who works for an engineering company in the capital, Santiago. She plans to vote for Kast who she said "gives me some security."

The country needs "to move forward and not go backwards on issues such as environmental policies, gender equality, and abortion," the 28-year-old said.

shift –n. to change or to cause something to change to a different position or condition

mainstream –n. the thoughts, beliefs, and choices that are accepted by the largest number of people

regulation –n. an official rule or law that says how something should be done

stability –n. the quality or state of something that is not easily changed or likely to change

gender –n. the state of being either male or female

abortion –n. a medical procedure used to end a pregnancy and cause the death of the fetus