Press Freedom Under Threat in Turkey


A coalition of media rights groups says freedom of the press is under attack in Turkey.

The coalition's representatives recently completed a visit to the country. They studied the government's treatment of reporters and the press. The findings were released a month before Turkey's general elections.

A crowd of supporters of the ruling AK party demonstrated near the offices of the Hurriyet newspaper last month. They were angry about an article in the newspaper. 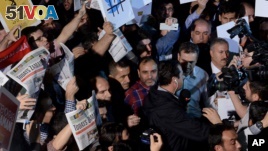 People rally in support of press freedom in Istanbul in October. Other groups have protested against media they say is anti-government. (AP Photo/Isa Simsek, Zaman)

The protestors claimed the story contained lies about Turkish President Recep Tayyip Erdogan. Days later, one of the newspaper's columnists was attacked outside his home.

Steven Ellis is with the International Press Institute. The group organized the coalition's fact-finding trip to Turkey. Mr. Ellis says there has been a series of moves against press freedom.

"There has been a spiraling increase in defamation lawsuits, or insult criminal cases, by the president in the last year and especially in recent months. Those compounded with firings, with raids on news outlets."

Last month, reporters the Dicle news agency protested against the arrest of several media workers under anti-terror legislation. They say the law is used to suppress reporting of the government's offensive against Kurdish separatists.

Mohammed Rasool was detained with two British journalists from the international news channel Vice News. The three were reporting on clashes between Kurds and Turkish police.

The two Britons have since been expelled from the country.

Melody Patry is with the group Index On Censorship. She was part of the delegation in Turkey. She says the three were not the only reporters detained.

"But Mohammed Rasool is just one example of the many other journalists and media workers who are being imprisoned and detained for simply doing their job, which is reporting the news, and that is not a crime."

Mehmet Solmaz is the news editor of the Daily Sabah newspaper. The publication is considered pro-government. He says Turkey's critics do not understand the complexity of the country's media.

"We do see sort of pressure, but that's due to mostly media moguls having different sort of agendas."

He says Turkish journalists often like to write or talk about political issues when they should be reporting news and information.

"Most of the journalists in Turkey are acting like an activist, instead of doing what they're supposed to do, like reporting."

The Turkish government did not accept an invitation to meet the International Press Institute delegation. VOA requests for an official reaction to the claims were unanswered.

Henry Ridgwell reported this story for VOA. Mario Ritter adapted it for Learning English. George Grow was the editor.

Do you have freedom of the press in your country? If not, how does that impact democracy and your government? Let us know on 51VOA.COM.

defamation – n. saying false things in order to make people have a bad opinion of someone or something

moguls – n. a term referring to a powerful or important person