Update Required To play the media you will need to either update your browser to a recent version or update your Flash plugin.
By Gregory Stachel
29 May 2021


International organizations and other groups are calling for climate change studies to become a usual part of school curriculums around the world. They say such education is an important step toward reaching targets on reducing greenhouse gas emissions.

The United Nations Education, Science and Culture Organization, or UNESCO, said this month that environmental studies should be taught in all countries by 2025. 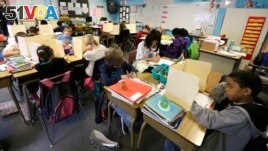 That may seem like a large goal, but some environmental groups and politicians say it is not enough.

Lorenzo Fioramonti is an Italian lawmaker and a former education minister. He said without faster progress on education, there will be no chance of reaching the goal of zero carbon emissions by 2050.

Fioramonti fought for a law in 2020 that made Italy the world's first country to have all schools teach about climate change. But he admits that forcing all schools to teach it has been difficult.

He resigned shortly after the law was passed so he was unable to oversee its establishment. At the same time, the COVID-19 emergency left Italy's schools struggling to teach the usual curriculum.

New Zealand has since begun teaching climate change studies for students between 13 and 19 years old. Other countries such as Argentina and Mexico are taking steps toward teaching it also.

The Brookings Institution, a United States research group, has called for climate action projects in all schools by 2025.

The group examined how people buy products after they have studied climate change. It found that investing in education would be more effective in cutting greenhouse gas emissions by 2050 than investing in wind and solar power.

Jim Knight is a Labour Party politician in Britain and the former Schools Minister. He presented a bill last Tuesday calling for "sustainable citizenship education." It included climate change studies and would become part of the normal school curriculum starting in 2023.

Britain is the current president of the Group of Seven leading industrial nations and Italy is leading the G20, a group of 20 major economies. Together, they could play an important part in pushing climate change education.

These two groups are organizing the U.N. climate change conference known as COP26. It will be held in Glasgow, Scotland in November.

Knight said, "If we are to make the changes in energy consumption, transport and food choices that we need to reach our carbon zero goal, then the best place to start is in schools."

Green parties and interest groups have also been pushing the G20 to officially support the proposal requiring that schools teach about climate change. Education ministers from the member countries will meet in the Italian city of Catania on June 22.

Garvin Jones reported this story for Reuters. Gregory Stachel adapted it for VOA Learning English. Susan Shand was the editor.

carbon – n. a chemical element that forms diamonds and coal and that is found in petroleum and in all living plants and animals