Update Required To play the media you will need to either update your browser to a recent version or update your Flash plugin.
By Dan Friedell
05 January 2023


In his new book about life as a member of the royal family, Prince Harry of Great Britain says he was once knocked down in a fight with his brother, Prince William.

Harry's book, Spare came out this week in Spain. It is supposed to be put on sale in other countries on January 10.

The prince is the youngest son of Britain's King Charles III and Princess Diana. His older brother, William, is next in line to become King after their father. 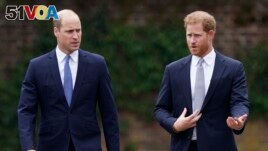 FILE - In a new book, Britain's Prince Harry says he was forced to the ground in a fight with his brother William. (Yui Mok/Pool Photo via AP, File)

The name of the book comes from Harry's position in the royal family. He is the spare, or extra, son.

The 38-year-old Harry made news in 2020 when he and his wife, Meghan Markle, decided to leave the royal family and move to California.

The book tells of a 2019 argument between the brothers that became a physical fight at Harry's home in London.

Harry wrote that William called Meghan difficult, rude and abrasive. In the argument, Harry wrote, William grabbed him by the shirt, broke his jewelry and knocked him down. He had "scrapes and bruises" after falling into the food bowl of the dog and breaking it. Harry said William told Harry to fight back, but he would not. William later apologized, Harry wrote.

Spokespeople for King Charles and Prince William did not comment about the story.

William and Harry were once considered good friends, especially after the death of their mother in a car crash in Paris in 1997. The brothers have not been as close in recent years.

Harry and Meghan gave up their royal duties in 2022. At the time, they said the royal family did not support them after their 2018 marriage.

In an interview with American television presenter Oprah Winfrey and during a recent six-part documentary on Netflix, Harry said his family gave reporters negative stories about Meghan. The negative stories and lack of support, he said, were a way to protect William.

Ahead of the book's wide release, Harry gave interviews to broadcasters ITV of Britain and CBS News of the United States. They are scheduled to come out next week. In a short video released by ITV, Harry said: "I don't know how staying silent is ever going to make things better."

Charles became king in September 2022 after his mother, Queen Elizabeth, died. However, the ceremony for his ascension to the throne will be in May. The event is called a coronation.

Harry has not yet said if he will be there. When asked by ITV, he said: "I don't know."

Harry also told ITV that he feels "betrayed" by his family for making him and Meghan "villains."

Harry is fifth in line to lead the royal family, behind his brother and William's three children. People who follow the family say Harry has often seemed unable to find his place. He spent 10 years in the British Army before taking on royal duties in 2005.

Dan Friedell adapted this story for VOA Learning English based on reports by Reuters and the Associated Press.

knock down –v. (phrasal) to cause someone or something to fall to the ground

rude –adj. showing an inability to treat others normally or in a civilized way

bruise –n. an injury from force that discolors the skin and causes pain

royal –adj. related to a king or queen

interview –n. a formal discussion in which one person aims to get information from another person

schedule –v. to plan for something

ascension to the throne –phrase to become king or queen

betray –v. to feel hurt because of what one sees as a lack of support

villain –n. a person who does bad things