Problems Happen When You Are 'Asleep at the Wheel'

Update Required To play the media you will need to either update your browser to a recent version or update your Flash plugin.
By Anna Matteo
13 August 2022

On this program, we explore words and expressions in the English language. We give examples and notes on usage.

The United States is a very big country. So, getting from point A to point B can take a lot of time. Most people who live in the U.S. drive cars. So, it should come as no surprise that we have many car expressions. 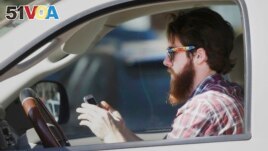 FILE - An man works his phone as he drives through traffic in Dallas, Tuesday, Feb. 26, 2013. Texas lawmakers are considering a statewide ban on texting while driving. (AP Photo/LM Otero)

Driving a vehicle is a big responsibility. After all, it is a heavy piece of machinery traveling at fast speeds. So, it is important to stay focused on the road.

You should pay close attention when driving. It is dangerous to drive when you are distracted or when you are tired. If you lose your focus, you could cause a crash.

The same could be said in other situations in life. And that brings us to our expression for today: to be asleep at the wheel.

This expression comes from the idea of someone falling asleep while driving a car. But as an idiom, it means someone is not paying attention or is focused on what they are doing. This can cause all kinds of problems.

If I am asleep at the wheel, I fail to see my responsibilities or duties. I am not paying attention to important issues for which I am responsible.

We often use this expression to describe a person who is not thinking about possible future problems. It can also be used when talking about a business or government that is not paying attention to problems waiting down the road.

The government agency in charge of public health safety was asleep at the wheel on this issue.

Here is a workplace example:

Gabrielle was supposed to make sure all the contracts were signed by the deadline. But she fell asleep at the wheel and did not get her task done on time.

Anyone can fall asleep at the wheel and in any situation. Here is an example from the world of sports.

During an important game, the star goalie of the football team was asleep at the wheel. The other team was able to score easily.

In these examples, we used the verbs "to fall" or "to be" with this expression. Both are correct. And neither one is more common than the other. So, feel free to take your pick!

And that is all the time we have for this Words and Their Stories.

When it comes to teaching English, VOA Learning English promises not to fall asleep at the wheel. We will stay focused on helping you improve your language skills!

point A to point B – idiomatic expression : to go from one place to another

distracted – adj. having one's thoughts or attention drawn away : unable to concentrate or give attention to something

idiom – n. an expression in the usage of a language that is peculiar to itself either in having a meaning that cannot be derived from the conjoined meanings of its elements (such as up in the air for "undecided") or in its grammatically atypical use of words (such as give way)

focus – n. a center of activity or interest

down the road – idiomatic expression : in the future

goalie – n. a player who defends the goal in any of various games (such as hockey, lacrosse, or soccer) : goalkeeper

switch – n. a device for making, breaking, or changing the connections in an electrical circuit