Producers Trying to Keep Up with Growing Vinyl Record Sales

Update Required To play the media you will need to either update your browser to a recent version or update your Flash plugin.
By Matthew Caputo
01 July 2022


The invention of the Compact Disc (CD) caused vinyl music records to fall out of popularity over 30 years ago.

But sales of vinyl records have been growing for the past 10 years. The COVID-19 pandemic only increased sales.

In 2021, money earned from "vinyl" sales was greater than $1 billion for the first time since CDs took over the market. 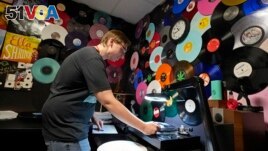 Vinyl records, made out of a kind of plastic, had been the main method for listening to music until the 1980s, when CDs took their place. As a result, many factories that produced vinyl records were shut down.

Mark Michaels is head of United Records, based in the city of Nashville, Tennessee. The company is the largest record producer in the United States. He said the industry "has found a new gear, and is accelerating at a new pace."

Many of the new customers are old enough to have listened to records during their childhood or young adulthood. But the recent increase in "vinyl" sales is not just from older buyers.

A younger generation is buying records. More current artists are meeting the new demand. They have begun releasing their newest records on vinyl as well as the normal electronic releases.

Because vinyl record sales were so low for so long, the industry has had to make major changes to keep up with increasing demand. Major record labels are restarting their old manufacturing plants. Smaller independent vinyl presses are also starting up.

There are now around 40 active vinyl plants in the U.S. and most of them are small. They cannot make records as fast as people are buying them.

It can take six to eight months for an order of records to be filled. Manufacturers are also dealing with shortages of materials, which can slow production even more.

The answer to these problems is not as simple as opening more factories. The machines that are needed to create vinyl records are rare. In the 1980s, many manufacturers destroyed or took apart their vinyl pressing machines.

Today, there are only a few companies that make the machines, and none of them are in the US. These machines are in such high demand that these companies cannot create them as fast as they are being bought.

There is some debate about the sound quality of vinyl records compared to electronic recordings, but that is not the whole story.

Mark Mazzetti develops musical artists and has worked for Sting, Janet Jackson, and others at A&M Records. He said: "I love the vinyl experience. All of it. To me, there is an electrifying sound when I play records that I don't feel from digital."

Because record production is not meeting demand, nobody knows how much longer the market will increase at this rate. For his own part, Michaels is hopeful about the future.

"I believe in music, and I believe in the importance of music in people's lives. I don't think that changes," he said.

new gear – n. to move from one level or area of activity to another

What do you think of vinyl records? Do you prefer music on vinyl or digital? We want to hear from you. Write to us in the Comments Section.