Update Required To play the media you will need to either update your browser to a recent version or update your Flash plugin.
By VOA
06 July, 2014

The Ambassador automobile is the most famous and longest made Indian car. Hindustan Motors released the first one to the market in 1958. The car soon became known as the King of Indian Roads. But now the long-time car leader will take a back seat. Hindustan Motors says it has suspended production of the Ambassador. Many Ambassador supporters fear it will never return.

The box-shaped car was based on a car design by Britain's Morris Oxford. Indians call the car the "Amby". The Amby has a strong steel body. The car makes it through very hilly areas and bad roads with ease. 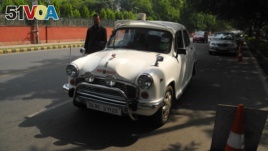 The Ambassador was the car favored by officials until a decade ago. (VOA/Anjana Pasricha)

Singh is a taxi driver. He says he would not use any other vehicle in his work. He says everyone likes it, it is a very comfortable car. He has driven only the Ambassador for 50 years. Mr. Singh was very sad when Hindustan Motors announced the end of production for the Ambassador. The company says its decision is the result of low demand and lack of money.

The auto market in India did not get seriously competitive until the middle of 1980s. Japanese car maker, Suzuki, joined within an Indian company to produce a small, low cost vehicle. But the Ambassador remained the car of the rich and the powerful.

Diksha Pande is a young professional in New Delhi. She remembers an orange and brown Ambassador her grandfather owned. But she has never thought of buying an Ambassador for herself.

"They are a bit retro, so they feel a little outdated, and I don't think they will have the same amount of power and swiftness that you want in a car in today's day and age. I like SUVs because they are big powerful cars. And power is important in a car," said Pande.

Hindustan Motors made few changes to the Ambassador design since its beginning. The Indian government continued using the car until ten years ago. Many taxi drivers like the Ambassador because repairs are generally low-cost. It was even rated the best taxi by the British television show Top Gear.

But Amby's sales records are not good. Last year, dealers sold only 2,200 of them out of 1.8 million car sales. There are reports about search for new Amby investor. But auto experts say they do not believe India's Ambassador will return.