Update Required To play the media you will need to either update your browser to a recent version or update your Flash plugin.
By Dan Friedell
07 May 2022


Andrea Hernandez is a student at the University of Texas.

As a high school student in Dallas, she studied math a lot and was proud of her skill in the subject.

But when schools around the U.S. closed because of the COVID-19 pandemic in March 2020, students started learning by video link and on computers. Hernandez found it hard to make progress. 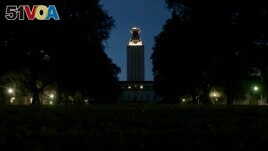 A nighttime view of the University of Texas campus in Austin.

By then, she was studying in a class called pre-calculus.

After more than one year of learning by video link, she had to take a calculus test before starting school at the University of Texas.

She did not do well. As a result, she had to start her college education in a lower-level math class.

Hernandez got a top grade of "A," but she told The Hechinger Report that she lost some belief in her math ability.

Now, she looks at calculus questions and thinks: "'I don't understand anything.' I'll just sit there," she said, "kind of lost."

College professors around the country are saying there are many students like Hernandez. These students had trouble learning when the pandemic changed the way they experienced school.

After two years, many students said they are less prepared for college than they hoped to be. Some say they have forgotten how to be students.

Uri Treisman is Hernandez's professor at the University of Texas. He told Hechinger Report that his students are making basic mistakes that he would not expect. About 25 percent did not pass his class in the autumn of 2021. Usually, he said, five percent fail the class.

Treisman said it was hard to see so many students have problems.

"Their failure is my failure," he said.

He is also worried about his students whose families do not make a lot of money. They might not have the same ability to get extra help.

"The wealthy are concerned and nervous about the futures of their children, and they're investing heavily in ensuring their children have an advantage," he said.

The professor said it is normal for students to come to the university with different skill levels, but they are usually able to catch up. During the last two years, it has been harder because students are distracted in different ways than in the past.

For example, Hernandez's grandfather, who lived in Mexico, died of COVID-19. She learned about it in the middle of her computer math class. It became hard for her to think about school when family members were sick and others had financial problems.

Another of Treisman's students had to drive into Texas from his home in Mexico to go to high school. When the pandemic closed schools, Halil Hamscho had to work from home in the border city of Matamoros, Mexico.

At that point, Hamscho said his classes were not as good. He called them "watered down." He still received good grades, but when it was time to take an exam before college, he did not get a good score. In college, he failed his first college calculus exam before forming a study group. After that, he received an "A" in Treisman's class.

Kristin Patterson is an associate professor of genetics at the University of Texas. She said in past years, only two to four percent of students do not get through her class. But last year, about 20 percent did not pass.

Patterson said the university does not fully understand how the pandemic changed learning for students when they were in high school. But it is slowly getting more information.

When students are able to work with a teacher in the classroom, she said, the teacher can judge a student's progress. When they are at home, that information is limited. In addition, some high schools permitted students to move on in their studies even with poor grades.

When students came back to school, some did not have to take standardized tests that permitted teachers to find out how much they had learned. In 2021, for example, some states asked the U.S. Department of Education for permission to change or cancel the tests.

Patterson at the University of Texas said some students did not understand the difference between the large meetings and small group discussions that form her class.

He works at an education research company called EAB. He said colleges must understand that a large number of incoming students have "unfinished" learning from high school.

For example, at the University of Maryland – Baltimore County, the number of students having trouble with math classes is higher than in the past. The university added classes to help students learn study skills and ways to plan their time.

Many college officials report that the students they accept do not have lower grades than usual. But they many have not "mastered" the subjects as well as students in past years.

Over the last two years, the U.S government has made billions of dollars of aid available for school systems across the country. Schools are expected to find out why students are having problems learning.

AP reports Chicago is using a system that places importance on a student's grades and rates of COVID-19 and violent crime in their neighborhoods.

In Boston, Lorena Rivera has two daughters who had trouble with math in the last two years. Her daughters would often start their work and then stop.

Early reports have been gathered from some of the biggest school districts in the country. They suggest that student groups which already faced problems, including Black, Hispanic, and poor students, appear to be behind in greater numbers.

But Treisman said lowering standards is not the answer. Sometimes he thinks he could make his classes easier.

"The big risk," he said, "is that I give them a good grade and they're not prepared for what comes next."

He commented that students could graduate from college and be unprepared for their jobs.

Venit said he worries that students who come from poor families or who are not white or who are the first in their families to go to college will have problems.

"This is a ‘rich gets richer' situation and a ‘poor stays poor situation,'" Venit said. He said that would reverse what those like him have been trying to do for 20 years.

Gisela Field studies the data that comes from student tests in a large school district near Miami, Florida. She said one year will not enough to correct all the problems.

"The bottom line," she said, "is that we have such a loss that it will take some time."

Dan Friedell adapted this report for Learning English based on a story by The Hechinger Report with additional material from the Associated Press.

nervous –adj. having or showing feelings of being worried and afraid about what might happen

ensure – v. to make sure something happens

distraction – n. something that makes it difficult to pay attentions

watered down – adj. weakened or made less strong or useful

standardized test –n. a test that requires all test-takers to answer the same questions which is used to measure a person's abilities

master – v. to get the knowledge and skill that allows you to do, use, or understand (something) very well

district – n. an area established by a government for official government purposes

reverse – v. to change to an opposite state or condition