Update Required To play the media you will need to either update your browser to a recent version or update your Flash plugin.
By Dan Friedell
29 August, 2016


Tyler Skluzacek's father, Patrick, could not sleep through the night.

It was 2007, and Patrick had just returned from a year in Iraq, where he was a convoy commander in the U.S. Army.

Patrick Skluzacek was energetic and happy when he left for Iraq, Tyler says. But when he returned, he was unhappy and drinking alcohol too much.

"I didn't like it," Tyler says. "I really did not know what was going on."

It turned out Patrick Skluzacek was suffering from sleep panic attacks. The nighttime panic attacks are a form of Post Traumatic Stress Disorder.

Patrick would wake up every night around 3 a.m. as if someone had shocked him with a jolt of electricity. His heart would beat too fast. He would sweat. He would be so awake that it would be hard to get back to sleep.

The nighttime panic attacks prevented Patrick from feeling good the next day. He did not do well at work, because he was so tired.

"It was a bad, bad phase in my life. Really bad," Patrick said.

Almost 10 years later, Tyler was in a position to help his father. 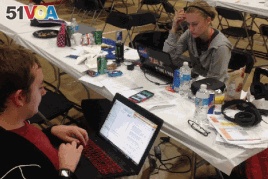 Tyler Skluzacek and another team member at a competition called HackDC, a 36-hour coding competition, teamed up with two other participants from other universities to create the myBivy smartphone/smartwatch application, in Washington, D.C. (Courtesy photo

He was about to graduate from a college in Minnesota. Tyler was studying math and computer science. He thought he could make a computer program that might help his father.

So he entered a competition in Washington, D.C.

He and three other students worked together to solve the problem Tyler's father, and other U.S. war veterans, were having. People called them "night terrors."

The students had 36 hours to come up with a program. They called it myBivy. That name comes from bivouac, a military term for a safe place to sleep.

The application uses a smart watch and a smart phone together.

The watch tracks the wearer's heartbeat. It sends the data to the program on the smart phone.

Research shows that a person's heart rate will increase right before a night terror. So if the wearer's heartbeat started to rise, myBivy would respond. The smart watch would vibrate and gently wake up the sleeping person. That was enough to prevent a night terror from happening.

Patrick did not know that he was his son's test subject.

He wore the watch for two weeks to get used to it. Then, without telling his father, Tyler turned on the application.

On the first night, the vibrations from the watch prevented 10 nightmares.

Patrick said he had not slept that well in many years, but he did not know why. It turned out that it was because of the app.

Tyler and his team won the contest in Washington, D.C. The prize was $1,500. Then the group tried to raise more money from investors, and they were surprised when they took in over $25,000 using the online site Kickstarter.

They entered another competition and won that one, too.

By the spring of 2016, Tyler and his team were testing the app with volunteers, and hoped to make it available to the public soon.

Faiza Elmasry wrote this story for VOANews. Dan Friedell adapted it for Learning English. Jill Robbins was the editor.

Could you be helped by an app like myBivy? We want to know. Write to us in the Comments Section or on 51VOA.COM.

convoy – n. a group of vehicles or ships that are traveling together usually for protection

commander – n. a person who is in charge of a group of people

Post Traumatic Stress Disorder (PTSD) - n. a mental condition that can affect a person who has had a very shocking or difficult experience (such as fighting in a war) and that is usually characterized by depression or anxiety

phase – n. a short period of time during which a person behaves in a particular way or likes a particular thing

veteran – n. someone who fought in a war as a soldier, sailor, etc.

nightmare – n. a dream that frightens a sleeping person : a very bad dream