Progress Made in Identification, Prevention of Brain Diseases

Update Required To play the media you will need to either update your browser to a recent version or update your Flash plugin.
By Pete Musto
25 July, 2019


Scientists are close to reaching a long-sought goal – a blood test to identify possible signs of Alzheimer's and other diseases of the brain.

This comes as a recent large study shows healthy behavior can cut a person's risk of developing such conditions, even if they have genes that raise that risk.

At the Alzheimer's Association International Conference on July 15, six research groups presented new results on several experimental tests. This included one that appears to be 88 percent accurate at identifying Alzheimer's risk.

Doctors are hoping for something to use during regular exams that can measure most signs of brain-destroying diseases. They could make better decisions about which patients need additional testing. Current tools such as brain scans and spinal fluid tests are too costly or difficult to do during regular meetings with patients.

"We need something quicker ... It doesn't have to be perfect" to be useful, said Maria Carrillo, chief science officer for the Alzheimer's Association.

Richard Hodes is director of the National Institute on Aging. He called the new results "very promising." He said blood tests soon will be used to choose and observe people for federally-supported studies.

"This has happened ... far faster than any of us would have expected," he told the Associated Press.

It cannot come too soon for patients like 66-year-old Tom Doyle. The former university professor from Chicago first experienced memory problems four years ago. He has had two spinal fluid tests since then.

First he was told he did not have Alzheimer's. Later he was told that he did have it. Over time, doctors discovered Doyle suffered from different dementia-linked diseases — Lewy body and Parkinson's.

"They probably could have diagnosed me years ago accurately if they had had a blood test," said Doyle. He represents patients on the Alzheimer's Association's leadership team.

About 50 million people worldwide have the brain disease known as dementia. Alzheimer's is the most common kind. There is no cure. Current medicines just temporarily ease its harmful effects. Many hoped-for treatments have failed. Doctors think past studies may have included people at too late a stage in the disease, when brain damage was already severe. The experts also say the research may have included too many people with problems other than Alzheimer's.

A blood test — rather than subjective estimates of thinking skills — could get the right people into the right studies sooner.

One of the experimental blood tests measures unusual kinds of the protein that forms plaque in the brain. Plaque is a major sign of Alzheimer's. Last year, Japanese researchers published a study of it. At the conference they gave results from additional testing on 201 people with Alzheimer's or other types of dementia.

Akinori Nakamura is with the National Center for Geriatrics and Gerontology in Obu, Japan. He said the test correctly identified 92 percent of people who had Alzheimer's and 85 percent who did not.

Another experimental test looks at neurofilament light, a protein that is a marker of nerve damage. Abdul Hye of King's College London gave results of a study comparing blood levels in 2,300 people with several different brain diseases, including dementias, depression, Parkinson's and multiple sclerosis. The study also included healthy people for comparison.

Eight of the diseases were linked to much higher levels of neurofilament light. The test cannot show which disorder someone might have. But it may help them rule out disorders in a patient.

Randall Bateman of Washington University School of Medicine in St. Louis also helped develop a blood test that measures the Alzheimer's protein. His work is supported by the United States government and the Alzheimer's Association.

"Everyone's finding the same thing ... the results are remarkably similar across countries, across techniques," said Bateman. He estimates a test could be as close as three years away.

Recent progress in dealing with conditions like Alzheimer's has not been limited to treatment.

Researchers at the conference also presented a new study about prevention of these diseases. The study also appeared in the scientific publication the Journal of the American Medical Association.

It showed that people with high genetic risk and poor health habits were about three times more likely to develop dementia than those with low genetic risk and good habits. And, with any level of genetic risk, a good diet, regular exercise, limited alcohol use and no tobacco use made dementia less likely. 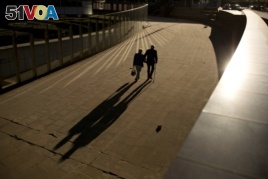 In this Thursday, Sept. 27, 2018 file photo, an elderly couple walks past the Berlaymont building, the European Commission headquarters, in Brussels. Research released on Sunday, July 14, 2019 suggests that a healthy lifestyle can cut the risk of developi

Elzbieta Kuzma and her team at the University of Exeter Medical School in England used the UK Biobank to study nearly 200,000 people age 60 or older with no signs of dementia. Subjects were identified as high, medium or low dementia risk based on genetic mutations. The study subjects were grouped also by lifestyle factors.

John Haaga of the National Institute on Aging says the study results are good news.

"No one can guarantee you'll escape this ... disease" but clean living can improve your chances, Haaga said.

One limitation of the study is that researchers only had information on mutations affecting people of European ancestry.

The results should ease fears that gene mutations alone decide one's brain health, said Rudy Tanzi, a genetics expert at Massachusetts General Hospital. Less than 5 percent of the mutations tied to Alzheimer's are "fully penetrant," meaning that they guarantee a person will get the disease, he said.

"That means that with 95 percent of the mutations, your lifestyle will make a difference," Tanzi said. "Don't be too worried about your genetics. Spend more time being mindful of living a healthy life."

Pete Musto adapted this story for VOA Learning English using materials from the Associated Press. Caty Weaver was the editor. We want to hear from you. What other progress do you hope will be made in the fight against brain and other diseases? Write to us in the Comments Section or on 51VOA.COM.

regular – adv. happening at times that are equally separated

scan(s) – n. the act or process of using a special machine to see the inside of something such as a part of the body

spinal – adj. of, relating to, or affecting the line of connected bones down the middle of the back

diagnose(d) – v. to recognize a disease or illness in someone

subjective – adj. based on feelings or opinions rather than facts

plaque – n. a change in brain tissue that occurs in Alzheimer's disease

mutation(s) – n. a change in the genes of a plant or animal that causes physical characteristics that are different from what is normal

factor(s) – n. something that helps produce or influence a result