Update Required To play the media you will need to either update your browser to a recent version or update your Flash plugin.
By Marilyn Rice Christiano and Frank Beardsley
31 July, 2012

SHIRLEY GRIFFITH: EXPLORATIONS -- a program in Special English by the Voice of America.

(SOUND)
That announcement was made May fifth, nineteen sixty-one. It was the first manned flight of project Mercury. Today, Tony Riggs and Larry West tell about the beginning of the United States space program that carried humans into space.

TONY RIGGS: The United States entered the Space Age in nineteen forty-five, at the end of World War Two. German rocket scientists, with the support of the German government, had spent fifteen years developing rockets as weapons. Near the end of the war, Germany began firing huge rocket bombs at Britain. 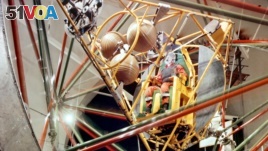 When the war ended, American forces found the parts for about one hundred V-2 rockets. They brought the German rockets to America and launched sixty-six of them.

LARRY WEST: The army opened the V-2 launch program to American scientists at several universities. Civilian scientists used the V-2 rockets to study the Earth's atmosphere. They gathered much new information and learned much about designing instruments for scientific rockets and satellites.

Many of Germany's top rocket scientists came to the United States after the war. They worked with American scientists and engineers to develop and test new rockets for military and scientific use. In nineteen fifty-six, the United States launched a Jupiter military rocket that flew more than five thousand kilometers.

TONY RIGGS: Military officials immediately offered to use the Jupiter to put a scientific satellite into orbit around the Earth. But the American government said no. Officials decided not to mix military and civilian rocket programs. The United States said it would not launch a scientific satellite until a non-military rocket -- the Vanguard -- could be completed to carry it into space.

Navy scientists were building the Vanguard for scientific purposes. They planned to launch it in nineteen fifty-eight.

The twenty-two meter long rocket would put a little scientific satellite into orbit as one of the events of the international geophysical year. The satellite itself would weigh less than two kilograms. But it would contain many tiny electronic instruments for scientific research.

In nineteen fifty-seven, a Soviet military rocket carried a small satellite into Earth orbit. The eighty-three kilogram satellite, called Sputnik, had two radios that sent signals as it circled the world. One month later, a larger Sputnik was launched with a dog inside. The dog survived the launch. But there was no way to return it to Earth. So it died in space.

TONY RIGGS: The Soviet successes with its Sputnik satellites caused the United States to change its space plans. Officials decided to launch the Vanguard as soon as possible.

The attempt was made on December sixth, soon after the first two Sputnik launches. The attempt failed. The rocket exploded during the launch. Less than two months later, however, the United States put its first satellite into orbit.

The rocket was an army Jupiter. The satellite was Explorer One. It weighed only fourteen kilograms. But it carried a great many electronic instruments for scientific research.

The instruments reported much new information about conditions in space. The most important was the discovery of a belt of radiation around the Earth. It was what we now call the Van Allen Belt.

Its job: the scientific exploration of space. Its major goal: sending the first Americans into space.

TONY RIGGS: The new space agency was given a lot of money and thousands of engineers and technicians from military and civilian agencies. Within three months, the man-in-space program had a name: Project Mercury. The name came from the ancient Greeks. Mercury was the speedy messenger of the Greek gods.

Much work had to be done before Project Mercury could put an American astronaut into space. Dependable rockets needed to be built and tested. A spacecraft had to be designed and built. A worldwide radio system was needed to communicate with orbiting astronauts. And astronauts had to be chosen and trained.

LARRY WEST: To save time, NASA decided to work on all parts of the program at the same time. It placed orders for four different kinds of military rockets for Mercury flights. It chose the McDonnell Aircraft Company to design and build the Mercury spacecraft. And it began to look for men who would be astronauts.

NASA said its astronaut candidates had to be between twenty-five and forty years old and in excellent health. They could be no taller than one hundred eighty centimeters. Candidates had to be highly intelligent, with an education in science or engineering.

NASA also said the first astronauts had to be military pilots with experience in test flying airplanes. Test pilots already were trained to make quick, correct decisions in dangerous situations.

All were married and had children. All were from small towns or cities. All were about the same height, weight and age. And all were experienced military test pilots.

LARRY WEST: Each of the new astronauts, however, brought his own special knowledge and skills to the Mercury project.

LARRY WEST: NASA made its first unmanned test flight of the Mercury spacecraft nine months after the project started. The launch was made from the space center at Cape Canaveral, Florida. The flight tested the heat shield. The shield protected the spacecraft from the great heat produced when it returned through the Earth's atmosphere.

Many other unmanned test flights followed in the next two years.

The final test flight was made at the end of January, nineteen sixty-one. It carried a chimpanzee named Ham on a seven hundred kilometer flight over the Atlantic Ocean. Several problems developed. But Ham survived the launch and the landing in the ocean. However, he never wanted to get close to a space capsule again.

TONY RIGGS: Space officials announced that astronaut Alan Shepard would become the first American in space. He would be launched early in May, nineteen sixty-one, on a short, fifteen minute flight. That will be our story next week.

SHIRLEY GRIFFITH: You have been listening to EXPLORATIONS -- a program in Special English by the Voice of America. It was written by Marilyn Rice Christiano and Frank Beardsley. Your narrators were Tony Riggs and Larry West. I'm Shirley Griffith. Listen again next week to the second part of the story of the Mercury program that took the first American astronauts into space.
Related Articles
go top