Project to Bring Clean Water to Remote Part of Kenya

Update Required To play the media you will need to either update your browser to a recent version or update your Flash plugin.
By Haruka Takeuchi
06 January, 2016


Each day in the United States, one person uses about 575 liters of water.

In Japan, one person uses about 374 liters of water.

And in Kenya, one person uses about 20. Japanese interns Tomoyuki Tsutsui and Keitaro Kakoi with residents of Kisumu, Kenya, where a water project will bring clean water to residents.

Tomoyuki Tsutsui and Keitaro Kakoi are Japanese university students working as interns at Grassroots Water Limited. Grassroots, a Nairobi company, and the interns are bringing clean and convenient water to people in Kenya.

Tsutsui lives in Kisumu, in west Kenya. Kisumu is home to the Luo, a large tribal group. Kisumu is the third-largest city in Kenya.

Tsutsui lives in a house without running water, also called tap water. He knows how difficult it is to live with limited water.

"I am feeling the importance of water through Kenyan life without tap water. I carry the tank of 20 liters three times in a week. It is very, very heavy. The water was too important for us to waste."

Some residents cannot go to northern Kisumu for water because it is too far away. In that area, people have to carry heavy water tanks on foot. It takes several hours to bring water from the nearest source each day. 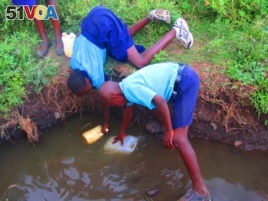 People who cannot carry water must use rainwater or buy it from merchants, who charge up to 20 Kenyan shillings for 20 liters of water. The city's tap water cost is 1 Kenyan shilling per 20 liters.

Tsutsui says it must be very tough for women and children to carry a heavy tank. He says it is hard even for adult men.

Tsutsui and Kakoi crowdfunded, or raised money online, to address this problem. On November 28, the crowdfunding raised nearly $8,000 or 900,000 (Japanese) yen. That is nearly 800,000 Kenyan Shillings.

Tsutsui says it has taken a long time to get government approval to build the water pipe and the water kiosk. But now, Grassroots and the government are cooperating.

When the water kiosk is complete, the price of water from the kiosks could decrease by half. And the residents of southern Kisumu will no longer have to travel a long way to get their water.

The construction of the water kiosk will start in January 2016. It should be completed by February.

Now it's your turn. Can you get clean water easily? Do you ever worry about wasting water? Write to us in the Comments section or on 51VOA.COM.

convenient - adj. allowing you to do something easily or without trouble

motivation - n. a force or influence that causes someone to do something

crowdfund - v. to provide money for a project or venture by raising many small amounts of money from a large number of people, typically via the Internet.

kiosk - n. a small store in a building or on the street where things are sold