Update Required To play the media you will need to either update your browser to a recent version or update your Flash plugin.
By Bryan Lynn
22 September 2021


A project by Google's parent company Alphabet has successfully used light beams to send high-speed internet signals across communities in India and Africa.

The latest project is one of several that aims to provide internet services to underserved, rural areas around the world. 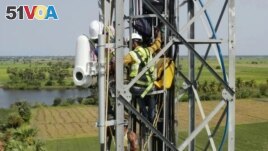 In developed countries, high-speed internet access is provided by fiber-optic cables. In fiber-optic systems, light signals are carried over long distances using fibers covered by cables. These systems are highly effective, but they can be extremely costly and require major deployment operations.

For this reason, many parts of the world -- especially rural and underdeveloped areas -- are not able to build and operate fiber-optic networks. The process can also be costly and complex in some city environments as well. This prevents millions of people across the world from having access to the internet and all that it offers.

The new system being tested in India and Africa offers a partial solution to this problem. It was developed by Alphabet's X development team, also known as the "moonshot factory."

Like fiber-optics, the system uses light to carry high-speed internet signals. But the light travels as beams through the air, without the need for fiber or cables. The beams can transmit high-speed data between two points with the help of receiving devices attached to structures. The technology is called Free Space Optical Communications (FSOC).

The project is called Taara. The idea for it came out of another Alphabet project called Loon. Loon aimed to use high-flying balloons to transmit internet signals to underserved areas on the ground. But after major research, development and testing, Alphabet announced in January that it could not make Loon successful and was ending the project.

The Loon team, however, had looked at the use of FSOC technology to create data links between balloons flying in the air. The Taara team built on this development and created a version of the system to operate on the ground.

Taara's latest project used an FSOC system to transmit high-speed data signals between two large African cities. The two cities are Brazzaville, in the Republic of the Congo, and Kinshasa, in the Democratic Republic of Congo.

The two cities are only 4.8 kilometers apart, separated by the Congo River. But Taara said in a statement that high-speed internet access is five times costlier in Kinshasa because the fiber connection has to travel more than 400 kilometers around the river. The transmission of data signals is possible as long as there is a direct line of sight between the system's receiving devices.

The system can be affected by some kinds of weather, such as heavy fog, or by birds or other animals getting close to the equipment. But the Taara team says it has already made progress in getting the system to adjust to such environments to avoid any service outages.

After deploying its "pointing and tracking" equipment to beam connectivity across the river, Taara said the link provided nearly 700 terabytes of data in 20 days with 99.9 percent availability. It noted that that amount of data would be equal to watching a FIFA World Cup match in high-definition (HD) 270,000 times.

Baris Erkmen is the director of engineering for Taara, which has reported similar results in tests of the system in India. He said the team admits that it cannot expect to see "perfect reliability" in the system through all kinds of weather and conditions.

However, he added: "We're confident Taara's links will continue to deliver similar performance and will play a key role in bringing faster, more affordable connectivity to the 17 million people living in these cities.

Bryan Lynn wrote this story, based on reports from Alphabet and Agence France-Presse. Hai Do was the editor.

beam – n. a line of light shining from something

fiber – n. a piece of a structure or object that resembles a thread

transmit – v. to send out signals

adjust – v. to change something slightly so that it works better

track – v. to record the progress or development of something over a period

reliable – adj. able to be trusted or believed

affordable – adj. reasonable priced and able to be bought by most people