Property Owners on US Border Face Pressure from Migrants, Government

Update Required To play the media you will need to either update your browser to a recent version or update your Flash plugin.
By John Russell
11 September 2022


A farm on the U.S.-Mexico border has become part of a larger disagreement between local, state and federal governments. The disagreement centers on immigration enforcement on the southern border of the United States.

The large pecan farm, known as Heavenly Farms, is owned by Hugo and Magali Urbina. They bought the farm, which is in Eagle Pass, Texas, in April 2021. 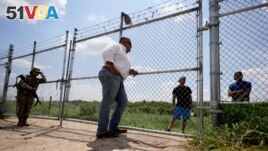 The farm is in the U.S. Border Patrol's Del Rio sector, which is fast becoming the busiest area for illegal border crossings. Thousands of people pass each week onto the farm.

The Urbinas at first welcomed a new chain-link fence placed on their property earlier this year. The fence was paid for by the state of Texas. It is part of Governor Greg Abbott's campaign to stop illegal border crossings along the Rio Grande River, which forms the border between Texas and Mexico.

Now one gate on the 1,200-mile Texas border has become part of a dispute about migration on America's southern border. But the Urbinas said they want no part of it.

After the lock was removed last month, Governor Abbott criticized the action on social media. "Unbelievable," Abbott wrote. "While Texas secures the border, the federal government is enabling illegal immigration."

The Urbinas do not oppose Abbott's campaign. But in the case of the lock, they said it went too far. They blamed what they see as a lack of a single command in an area with many state troopers, Texas National Guard members, U.S. Border Patrol agents and local officials. Sometimes these groups work together.

"They are all doing what they are being told," Magali Urbina said. "It is really not their fault, but ... there is no boss."

Migrants had come to the Urbinas' farm long before the two bought it.

Agents stopped migrants nearly 50,000 times in the Del Rio sector in July. About six of 10 stops in the Del Rio sector were migrants from Venezuela, Cuba or Nicaragua. They were likely to be released to bring their immigration cases in U.S. courts because poor diplomatic relations with those countries mean the U.S. cannot, in some cases, send them home.

Migrants cross the river and climb a few feet uphill into overgrown plants and concertina wire to surrender on the farm's edge. They expect to be released. U.S. Border Patrol agents, state troopers and reporters are usually in the area.

"The governor is telling everyone, ‘Secure the border.' I have no doubt that is the intent but the reality of it is that it's just not that simple," Anfinsen said.

Border Patrol officials declined to comment to the Associated Press.

Ericka Miller is a spokeswoman for the Texas Department of Public Safety. She said the agency is going along with the Urbinas' request to have the gate unlocked. She said DPS is also working to remove overgrown plants on the property. But Miller said the Urbinas are permitting a barrier to stay on the property.

"All landowner agreements are voluntary" and can be ended at any time, Miller said in an email.

‘This is our land'

At Heavenly Farms, the chain-link fence makes it easier for the Urbinas to bring trespassing charges against people crossing into their farm. However, the Urbinas have not done so yet, although they know cattle ranchers who have.

The state and federal governments are each "wanting to pull all the levers" and not working together, Hugo Urbina said. The two regret what they see as miscommunication.

Acacia Coronado reported on this story for the Associated Press. John Russell adapted it for VOA Learning English.

pecan – n. a tall tree in the United States and Mexico that produces a nut that can be eaten

enable – v. to make (something) possible, practical, or easy

concertina wire -- n. a kind of barbed wire that is used as an obstacle

intent – n. the thing that you plan to do or achieve : an aim or purpose

trespassing –n. to go on someone's land without permission

lever – n. something used to achieve a desired result; a bar or rod that is used to operate or adjust something on a machine, vehicle, device, etc.