Update Required To play the media you will need to either update your browser to a recent version or update your Flash plugin.
By Alice Bryant
13 September, 2018


A proposal to create a whale sanctuary in the South Atlantic Ocean was defeated this week at a meeting in Brazil of the International Whaling Commission, or IWC.

Whales are mammals that live in the sea and some are among the largest animals ever to have lived.

The proposal received support from 39 countries but was opposed by 25. That was just a little less than the three-quarters majority needed for approval. Brazil first introduced the proposal in 2001. 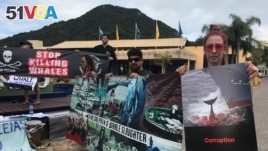 Japan and other nations argued that the sanctuary was not needed because countries are not currently doing commercial whaling in the South Atlantic.

Environmental groups and conservationists argued that the sanctuary would protect whales from being hunted, trapped in fishing gear or struck by ships.

"It (is) so important for the conservation of whales around the world but especially in the South Atlantic," he said.

In addition to Japan, countries opposing the sanctuary included Iceland and Norway. They are pushing for the return of some sustainable whaling and are unlikely to change their vote unless their demand is met.

The commission banned commercial whaling in the 1980s. Japan is proposing to bring it back this year with catch limits. Japan has hunted whales for hundreds of years as a less costly form of meat.

Daven Joseph is ambassador-at-large for Antigua and Barbuda, another nation which voted against the measure. He said the proposal has some value but "is failing year after year because there is a lack of respect for the views of everyone in this organization."

Joseph said sustainable commercial whaling could provide an important food for developing island nations. And, some countries have a cultural and nutritional use for whale meat that should be respected.

Conservationists say commercial whaling has proved difficult to supervise in the past. They say it threatens whale populations. Some countries say there is simply no place for whaling in the modern world.

But Joseph predicted that progress on many conservation measures would be impossible without compromise.

"Since childhood, I have been trained to hunt," said Vladimir Piny, a native Chukchi whaling captain from northern Russia. "I cannot grow tomatoes or bananas. The Arctic would never allow me to do so."

Japan accuses the IWC of supporting anti-whaling nations rather than trying to reach a compromise.

The subject of commercial whaling has split the IWC for many years and neither side has appeared to be willing to compromise.

sanctuary – n. a place where someone or something is protected

conservationist – n. someone who works to protect animals, plants, and natural resources

subsistence hunting – n. hunting that is done only to provide food for people