Update Required To play the media you will need to either update your browser to a recent version or update your Flash plugin.
By VOA
21 February, 2017


In 1991, workers in New York City made a troubling discovery.

They found human bones. After examinations by experts, the remains were found to be of African-Americans, some of whom had been slaves. They had been buried in the 17th and 18th centuries.

Now, members of Congress from the state of New York want a museum and education center built. They want to help people remember and learn about a very dark period in American history.

The congressional members estimate that 20,000 people -- men, women and children -- were buried at the place in the lower part of the New York City borough of Manhattan.

After the discovery of the remains, the burial ground was declared a National Historic Landmark in 1993. A monument was created in 2006 and later a visitor's center opened.

But supporters of the bill to build a museum and education center say more needs to be done so Americans will never forget about slavery. It was a period when people were shipped from Africa against their will, bought and sold, and made to work without pay. Many were separated from their families.

"Their contributions to America in the face of great injustice and persecution should not be forgotten," said Senator Kirsten Gillibrand, a Democrat from New York. 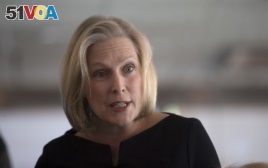 "It has been nearly 400 years since the first African slaves were brought to the United States, marking the beginning of one of the darkest periods of our nation's history," he said. Creating a museum and education center, Espaillat said, is a great way to examine the "suffering and injustice slavery" created throughout America.

Michael Blakey is a physical anthropologist at William & Mary College in Virginia. He examined some of the skeletal remains that were found at the burial area.

In an interview with Archaeology Magazine online, he said that many people are troubled by human remains. But he said they can provide important information about the people who were buried, including the countries they came from.

"In the proper context, science can give the public a chance to get close to these people," he told the magazine.

"They stir things in us -- many different feelings at once."

museum - n. a building in which interesting and valuable things such as paintings, scientific or historical objects are collected and shown to the public

borough - n. part of a large city with its own government -- New York City has five boroughs

monument - n. a building or statue that honors a person or event

contribution - n. something given to benefit somebody or something

persecution - n. to treat someone cruelly or unfairly especially because of race, religious or political beliefs

context –n. the conditions that affected something that happened

stir - v. to cause an emotion or reaction