Update Required To play the media you will need to either update your browser to a recent version or update your Flash plugin.
By Bryan Lynn
02 January, 2019


Two women have entered a Hindu temple for the first time since a ban was lifted on female visitors between the ages of 10 and 50.

The women entered the Sabarimala temple in the southern state of Kerala on Wednesday. The move led to large protests across the state.

The longtime ban barred women or girls of menstruating age from entering the temple, which draws millions of visitors each year. Some Hindus consider menstruating women to be impure.

India's Supreme Court ordered a lifting of the ban in September. But despite the ruling, opponents and conservatives continued to block women aged 10 to 50 from entering.

A local police spokesperson said officers walked with the two women Wednesday to provide protection during their visit. The Reuters news service reported that a police official said officers also guarded the homes of the women after they left the temple. Police were also prepared to go with other women who wanted to enter the temple, the official said. 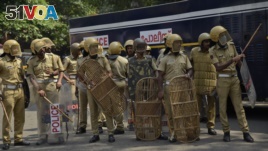 Protests broke out in several places in Kerala state after the women entered the temple. The police spokesperson said demonstrators blocked several roads and threw rocks at officers. He added that police fired tear gas in an effort to stop violence. There were no immediate reports of injuries.

Police officials said they were preparing for more demonstrations on Thursday because several political and Hindu groups have called for a strike to protest the women's entry.

On Tuesday, millions of women in Kerala joined hands to form a human link that stretched more than 600 kilometers. The act was a showing of support of gender equality. The Communist Party of India, the ruling party in Kerala state, said about 5.5 million women took part.

On Wednesday, hundreds of women in Mumbai, India's financial capital, also formed a human chain to express support for the women in Kerala.

The Supreme Court has agreed to re-examine its decision to lift the ban, after numerous legal challenges were brought against it.

Opponents of the ruling have argued that decisions made by the temple's religious leaders are protected by India's constitution. They also note that women of all ages can worship at other Hindu temples.

The Kerala state government has sought to permit women to enter the Sabarimala temple. But the position has drawn criticism from other political parties. Indian Prime Minister Narendra Modi's BJP party opposes the Supreme Court's decision.

Modi told India's ANI news service that he felt the temple issue was more about religious tradition than gender equality. He noted that there are also temples that bar men from entering.

temple – n. building where people in some religions go to pray or worship

menstruation – n. of or relating to the flow of blood that comes from a woman's body each month

challenge – n. an expression of disagreement with ideas, rules or authority

worship – v. to show respect and love for God by praying or attending religious services