Update Required To play the media you will need to either update your browser to a recent version or update your Flash plugin.
By VOA
14 September, 2012

Violent protests spread across the Arab World and other areas Friday over a private video produced in the United States. Crowds targeted American and western embassies as opposition to the film continued to grow. Three days earlier, armed militants killed the American ambassador to Libya and three other Americans in an attack in Benghazi, Libya.

The low budget film "The Innocence of Muslims" makes fun of Islam. It shows the Prophet Mohammed as a womanizer and a terrorist. The video reportedly was made in California.

It remains unclear who made the video. Some news organizations have linked the film to a fifty-five year old Egyptian Coptic Christian who lives in California. They say he recently served a prison sentence for illegal financial activities. 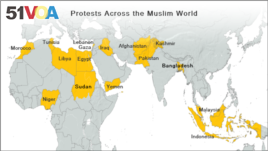 Countries where protests have taken place.

The suspected director of the film spoke with Radio Sawa. He said any claim of government involvement in the making of the movie is funny, and that America has nothing to do with the film. He also criticized the protesters. He said Arabs "have to learn to demonstrate peacefully against the issues on which we disagree." He also said he was saddened by the deaths, but he did not regret making the film.

"The Innocence of Muslims" was publicized by American clergyman Terry Jones. In recent years, his actions against the Quran, Islam's holy book, incited violence in Afghanistan.

The protests against the film began Tuesday on the eleventh anniversary of the Two Thousand One terror attacks on the United States. In Cairo, the demonstrations began peacefully, until a few protesters broke through the American embassy walls and replaced the American flag with a Muslim one. Later Tuesday, a crowd attacked the American consulate in Benghazi, killing the four Americans, including Ambassador Chris Stevens.
There were reports that the attack was well planned since it took place on September eleventh. The Obama administration has not commented on these reports. However, intelligence officials have investigated the possible involvement of al-Qaida in the film. But they say there is not much evidence to support this idea.

On Wednesday, President Obama condemned the attacks on the American embassies.

PRESIDENT OBAMA: "We reject all efforts to denigrate the religious beliefs of others. But there is absolutely no justification to this type of senseless violence. None. The world must stand together to unequivocally reject these brutal acts."

CHRIS STEVENS: "A Salaam Alaikum, my name is Chris Stevens, and I'm the new US Ambassador to Libya. I had the honor to serve as the US envoy to the Libyan opposition during the revolution. And I was thrilled to watch the Libyan people stand up and demand their rights. Now, I'm excited to return to Libya to continue the great work we've started. Building a solid partnership between the United States and Libya, to help you, the Libyan people, achieve their goals..."

Ambassador Stevens was said to be popular in Libya. In the nineteen eighties, he taught English in Morocco as a Peace Corps volunteer.