A Public Referendum: Not Always the 'Last Word'

Update Required To play the media you will need to either update your browser to a recent version or update your Flash plugin.
By Mario Ritter
07 October, 2016


Many countries use a public referendum to decide major policy questions. But the results of several recent referenda have been anything but clear and simple.

Governments usually call such votes to let the public have the final say on an issue or policy.

But last Sunday, voters in Colombia rejected a peace deal with the country's largest rebel group. The deal would have ended over 50 years of conflict between the government and Marxist rebels.

Also last weekend, a referendum in Hungary on immigration left both sides claiming victory. Voters were asked if the European Union could require the country to accept asylum seekers.

Earlier this year, Britain's vote to leave the E.U. has seemingly increased, not reduced, divisions in the ruling party.

Colombian voters rejected a peace agreement between the government and the Revolutionary Armed Forces of Colombia, known as FARC.

Colombian officials and FARC representatives negotiated the agreement over four years, mainly in Havana, Cuba. But voters narrowly rejected the deal in a popular vote on October 2.

Fifty-point-two percent of voters said "no" to the agreement. Earlier, public opinion studies predicted the measure would pass easily.

Colombian President Juan Manuel Santos said he is not giving up on the deal with the rebels. Santos spoke on Colombian television after the vote. He accepted the defeat, but did not declare peace efforts dead. 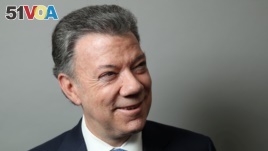 While the president did not win the referendum, he has received international recognition for his efforts.

Santos won the 2016 Nobel Peace Prize on Friday. The Nobel committee said it was honoring the president because of his "resolute efforts" toward peace. It also said the award should be seen "as a tribute to the Colombian people who, despite great hardships and abuses, have not given up hope of a just peace."

Colombian officials and FARC negotiators met in Havana this week in an effort to save the peace deal. United Nations Secretary General Ban Ki-moon sent special representative Jean Arnault to Cuba to assist with the talks.

On Wednesday, the Colombian president announced he was extending a ceasefire with the rebels until October 31.

Santos and FARC's leader, known as Timochenko, signed the agreement on September 26. The U.N. Secretary-General attended the signing ceremony. So did a number of Latin American leaders and United States Secretary of State John Kerry.

The agreement would have brought to an end the longest conflict in the Americas which is blamed for more than 220,000 deaths.

Rebels would have been permitted to form a political party in exchange for putting down their weapons. 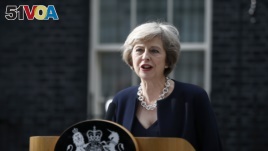 Britain's Prime Minister, Theresa May, has said Britain may begin the process of spliting with the E.U. next year..

May has said the process could start by the end of March 2017.

Britons voted to cut their country's ties with the E.U. in a referendum on June 23.

To cancel its membership, Britain must use Article 50 of the E.U.'s Lisbon Treaty. That process would take two years to complete.

Britain would still have ties with Europe, but would need to negotiate new agreements with the E.U. on everything from trade to immigration.

But even supporters of Britain's exit from the E.U., or Brexit, do not agree on what the move should involve.

Some supporters have called for a quick, sharp break with Europe, what is being called a "hard Brexit." They want Article 50 to be invoked earlier.

The terms of a possible Brexit agreement, however, have divided Prime Minister May's Conservative Party. Immigration is one of the central issues.

May and her ministers have said they will not compromise on immigration controls to get better free trade deals with the E.U. They want Britain to control its immigration policy without Europe's influence.

That position has concerned business leaders and investors. They worry about more restrictions on immigration and use of foreign workers. The measures might include a test for businesses employing foreigners and requiring British companies to provide information about such workers.

Business leaders say Conservative ministers are trying to use economic populism by blaming companies for hiring foreign workers. They say the Conservatives are turning away from the legacy of former Prime Minister Margaret Thatcher. Her position was that businesses should be able to operate without political interference.

Businesses also are concerned that a "hard Brexit" would leave Britain in a weaker position when trading with the single European market. European trading partners could place higher taxes on British exports to punish the country for its position on migration or other issues.

Another referendum in Europe has raised more questions than it has solved.

Hungarians voted on October 2 against the European Union's power to set the number of immigrants E.U. members must accept. 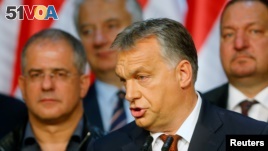 "The result of this referendum will be a strong weapon in Brussels," he said.

Both supporters of the E.U. powers on immigration and opponents, including Orban, claimed victory in the Hungarian vote.

Mario Ritter wrote this story for VOA Learning English. His report was based on stories by Nike Ching, Celie Mendoza, Fern Robinson, Jamie Dettmer and Heather Murdock. George Grow was the editor.

We want to hear your thoughts. Send us your comments in the section below.

exit - n. something used as a way to go out of a place; the act of leaving

populism – n. related to policies that supposedly represent the opinions of ordinary people

turn away from – v. to reject, to be less influenced by

legacy – n. something passed down from older generations