Update Required To play the media you will need to either update your browser to a recent version or update your Flash plugin.
By Jill Robbins
13 February, 2015


Students in American schools learn from an early age to give presentations as part of their regular classroom activities. Children as young as five years old often give brief talks about objects they bring in to school - called "show and tell," this training is a basis for later public speaking.

Even so, many native English-speaking adults are afraid to speak or give presentations in front of a large group. There is a large industry of consultants who train professionals in public speaking.

"I saw a thing, actually a study that said: speaking in front of a crowd is considered the number one fear of the average person. I found that amazing. 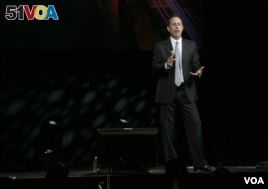 Comedian Jerry Seinfeld performs during the Robin Hood Benefit Concert on Monday, May 14, 2013 in New York.

Number two, was death. Death is number two? This means, to the average person, if you have to be at a funeral, you would rather be in the casket than doing the eulogy."

Speaking English in public meetings is necessary for many students and employees. The best way to improve is to practice public speaking in a friendly environment. Learners need to receive feedback about what they are doing well and about their mistakes. One group that gives members the chance to practice is Toastmasters.

Toastmasters is an international organization that holds weekly meetings. At the meetings, members each give a speech and give others advice about their speeches and speaking style.

Charles LeBeau is a public speaking professor and consultant. He began his career in Japan in 1982. Currently, he teaches at two universities and at the Toshiba International Training Center. He has also written books on the subject.

English language learners around the world use his book Speaking of Speech.

Mr. LeBeau says that students in other cultures may not have the chance to practice public speaking as young children. When they reach the college level, or enter their career, they need to present well in English. Many careers require public speaking skills.

So, the professor divides public speaking into three parts: the physical message, the visual message, and the story message.

The graphic shows examples of these three messages. Mr. LeBeau finds that company employees are under pressure to perform well when giving professional presentations. He says it can take years to improve general English speaking ability.

He says the simple approach to breaking down the parts of public speaking has proved itself. He says learners improve quickly and do a good presentation after a few days of study. 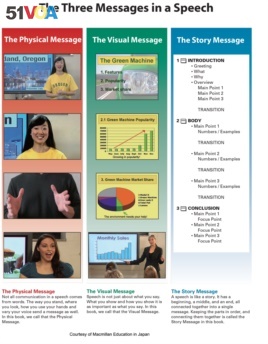 Modern technology is an important tool in teaching and learning public speaking. Many students now have a phone or device that can take videos. Using these videos, students can watch themselves and see how they appear to their audience. They can also watch models of good speeches on the Internet and learn from watching videos of public speaking experts.

In the next ‘Speaking Tips' we will explore Charles LeBeau's recommendations for improving the Physical Message. He thinks this is the public speaking skill that is easiest for English learners to improve quickly.

Jill Robbins wrote this story for Learning English. Caty Weaver was the editor.

consultant – n. a person who gives professional advice or services to companies for a fee

visual – adj. relating to seeing or to the eyes

feedback – n. helpful information or criticism that is given to someone to say what can be done to improve a performance, product, etc.

approach – n. way of dealing with something; a way of doing or thinking about something

simultaneously – adv. referring to events happening at the same time