Update Required To play the media you will need to either update your browser to a recent version or update your Flash plugin.
By Anne Ball
18 September, 2016


The average American throws away about 84 kilos of plastic every year.

Much of that ends up in the ocean, according to the marine research group Algalita. Almost half is thrown away after just one use. 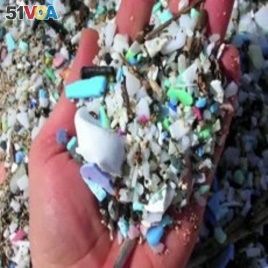 And the plastic in the ocean does not go away. Instead, it breaks down into smaller and smaller pieces. Then the fish and other marine life eat it. That can make them become sick, or even die.

National Geographic reported in 2015 that there are 5.25 trillion pieces of plastic debris, or trash, in the ocean.

Paul Tasner is an industrial engineer. He spent most of his career making plastic. He made "blister packs," the plastic wrap around consumer products that are very hard to open, even with scissors.

The packs help protect products during shipping, and help prevent goods from being stolen.

Then one day, Tasner had a moment that changed his life.

"My wife came back from a big box retailer with a pair of these industrial-strength shears for opening packages. That's what is said on the package: you know, ‘For opening those hard to open plastic blister packages." The shears were called, ‘Open it.'"

He says the funny -- and crazy -- part was that the shears to open the blister packs were packed -- in a blister pack.

This gave him an idea.

That idea was to create environmentally friendly, biodegradable packaging.

Tasner lost his job during the economic recession years ago. He was 64 years old and he did not want to retire. So he decided to start his own company.

His aim was to create a product that was similar to regular plastic, but able to be composted into soil. That means that when the product is put in the ground after use, it will break down quickly into the soil.

Regular plastic ends up in oceans or in landfills, where it can remain for thousands of years before breaking down into soil.

Elena Olivari is an architect. She has experience in engineering and design. She was looking for something new to do. She decided to join Tasner in his start-up —or new—business.

For Olivari, a family member's death from cancer had a strong effect on her.

"There are links of plastic-related cancer, so even doing something that can reduce that number of people that are harmed by the plastic and reducing the amount of plastic in the world, which is becoming absolutely too big to deal with. We're doing something that made me feel like, well, you know, even if we can make a small difference its better than nothing."

Tasner and Olivari named their company PulpWorks. It launched in August 2011. They worked together to create a product called Karta-Pack to replace the plastic blister packs.

The PulpWorks website says that the company turns "garbage into safe, planet-friendly products."

Tasner admits that the technology they use is not new.

Karta-Pack is similar to some kinds of egg cartons—the packaging that protects eggs in the store. Some egg cartons are made from recycled newspaper.

Karta-Pack is also made from recycled newspapers, as well as cardboard and different kinds of agricultural fibers, Tasner says. These are plant-based materials.

Since it launched in 2011, PulpWorks has become a leader of "green" packaging. The company makes packaging for some of the biggest companies in the world, including T-Mobile, Burt's Bees cosmetic products, Max Factor and Cover Girl cosmetics, and Leapfrog toys.

"Every package that we produce replaces a piece of plastic that is not going into a landfill. What could be better than that? Except to do it a billion times over, really, and that's our goal."

The company plans to expand its use of local agricultural fibers to more countries and continents, including Africa.

Jan Sluizer reported this story for VOANews. Anne Ball wrote her report for Learning English. Ashley Thompson was the editor.

We want to hear from you. Write to us in the Comments Section, and look us up on 51VOA.COM.

marine – adj. having to do with the sea or ocean

shears – n. scissors, a tool to cut things with

biodegradable – adj. of a substance or object capable of being decomposed by bacteria or other living organisms

landfill – n. an area where waste is buried under the ground

geography – n. an area of study that deals with the location of countries, cities, rivers, mountains, lakes, etc.