Update Required To play the media you will need to either update your browser to a recent version or update your Flash plugin.
By John Russell
27 April 2022


The United States hydropower industry considers pumped storage the best answer to a question surrounding renewable energy: where to get power when the sun is not shining or the wind is not blowing.

But pumped storage faces an unclear future. Even though experts predict growing demand for power storage, the industry's growth has slowed.

What is pumped storage? 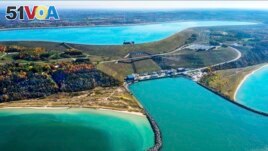 Pumped storage is when water is sent from a lower reservoir to an upper one, then released downhill through large machines known as turbines.

Pumped storage dates from the early 1930s. But most systems were built many years later to hold electricity from nuclear plants.

Supporters call these systems "the world's largest batteries" because they hold large amounts of energy.

The U.S. has 43 pumped storage facilities that hold about 22 gigawatts. Yet, just one small operation has been added since 1995 — and it is unknown how many of more than 90 planned facilities can overcome economic, legal and practical issues that force long delays.

Three projects have received permission from the Federal Energy Regulatory Commission (FERC), but none are being built.

In contrast, more than 60 are being built worldwide, mostly in Europe, India, China and Japan.

Malcolm Woolf, president of the National Hydropower Association, complained during a January hearing of the Senate Energy and Natural Resources Committee. He said official approval involves too many agencies.

But recent designs include "closed-loop" systems that use a surface or underground supply, then repeatedly cycle that water between reservoirs. Water would be added only to make up for evaporation or leaks.

Yet some are drawing resistance, including the Goldendale Energy Storage Project in Washington state. It would send water between two 24.3-hectare reservoirs on opposite sides of a hill.

The facility could power nearly 500,000 homes for up to 12 hours, according to Rye Development, which is leading the project. It is seeking FERC approval and is scheduled to go online in 2028 but still needs permission from Washington state.

Environmental groups fear harm to wetlands and wildlife, while Native American tribes say the project would cross onto a sacred area.

"What are we willing to sacrifice to get this technology online?" said Bridget Moran, an associate director of American Rivers.

Developers say the project would include cleanup of the polluted, lower reservoir area.

As the market for stored energy grows, new technologies are appearing.

Texas-based Quidnet Energy, for example, has developed a pumped storage system that forces water underground, holds it amid rock layers and releases it to power turbines.

For now, batteries are the leading competitor to pumped storage plants, which can generate power for eight to 16 hours. Lithium-ion batteries usually last up to four hours, but longer-lasting ones are in the works.

"Are we going to get to the point where an eight-hour battery is cheaper than a pumped storage plant? That's the billion-dollar question," said Paul Denholm, an expert with the National Renewable Energy Laboratory.

A 2016 Energy Department report said the U.S. network could have 36 gigawatts of new pumped storage capacity.

"We don't think pumped storage is the be-all, end-all but it's a vital part of our storage future," said Cameron Schilling, vice president of markets for the hydropower association. "You can't decarbonize the system without it."

John Flesher reported on this story for the Associated Press. John Russell adapted it for VOA Learning English.

hydropower – n. of or relating to production of electricity by waterpower

reservoir – n. an artificial lake where water is collected and kept for use

evaporation – n. a change in state from a liquid to a vapor

decarbonize – v. to remove carbon from