Pumpkins Are Huge As Halloween Approaches

Update Required To play the media you will need to either update your browser to a recent version or update your Flash plugin.
By Dan Friedell
12 October, 2016

October might seem to be pumpkin month in the U.S.

The holiday of Halloween comes on October 31. Americans around the country are already using social media to show off their pumpkin growing and carving skills.

Pumpkins are round, orange fruits related to squashes and gourds. People use their flesh and seeds for food, but they are also popular decorations in the fall.

Two big pumpkins recently made headlines in the U.S.

A farmer in the northeastern state of Rhode Island broke the record for the largest pumpkin ever grown in North America. 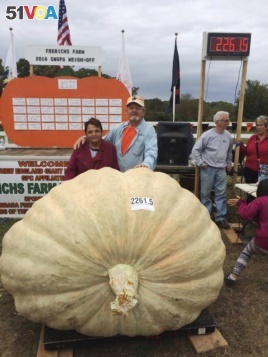 Richard and Catherine Wallace stand with a 1,026 kg. pumpkin that Richard grew to set the North American giant pumpkin record at the Frerichs Farm Pumpkin Weigh Off in Warren, R.I.

A schoolteacher in the northwestern state of Washington brought her large pumpkin to an event in California. Her pumpkin was the champion, weighing 866 kilograms.

It turns out that Cindy Tobeck's pumpkin grew from one of the seeds from Ron Wallace's pumpkin from 2015.

While those pumpkins are large, they are still not the largest in the world.

According to the website BigPumpkins.com, Richard Wallace's pumpkin is only the second-heaviest pumpkin of the year. A man in Belgium produced a pumpkin that weighed almost 1,200 kilograms.

Smithsonian magazine wrote a story about people who try to grow large pumpkins. In 35 years, the size of record pumpkins has grown from about 225 kilograms to over 1,000 kilograms.

Pumpkin farmers trying to grow record fruits are taking the seeds of champion pumpkins from one year and breeding them with other large pumpkins.

But people are not just growing pumpkins. They are carving them, too.

One Twitter user from Britain recently posted a photo of a pumpkin designed to look like U.S. presidential candidate Donald Trump.

No word of a Hillary Clinton pumpkin design. But one pumpkin farmer in California allows visitors to shoot small pumpkins out of a cannon.

The targets? Large paper cut-outs of both Trump and Clinton.

What do you think of the large pumpkins? We want to know. Write to us in the Comments Section or on 51VOA.COM.

carve – v. to cut (something, such as a pattern or design) into a surface— often + into or on

cannon – n. a large gun that shoots heavy metal or stone balls and that was once a common military weapon

record – n. a performance or achievement that is the best of its kind

squash – n. a type of fruit (such as a pumpkin) that has a usually hard skin and that is eaten cooked