Update Required To play the media you will need to either update your browser to a recent version or update your Flash plugin.
By VOA
10 October, 2012

From VOA Learning English, this is THE MAKING OF A NATION – American history in Special English. I'm Steve Ember.

This week in our series, we tell the story of the European settlers who established colonies in the American Northeast in the sixteen hundreds.

The Puritans were one of the largest groups from England to settle in the area known as Massachusetts. They began arriving in sixteen thirty. The Puritans had formed the Massachusetts Bay Company in England. The king had given the company an area of land between the Charles and Merrimack rivers. 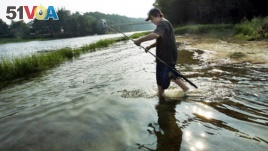 Puritans thought their faith was the only true religion and that everyone should believe in it. They also believed that church leaders should lead the local government, and that all people in the colony should pay to support the Puritan church. The Puritans thought it was the job of government leaders to tell people what to believe.

But some people disagreed with the Puritans who became leaders of the colony. One of those who disagreed was a Puritan minister named Roger Williams.

Roger Williams believed, as all Puritans did, that other European religions were wrong. He thought the spiritual traditions of the Native Americans were wrong, too. But he did not believe in trying to force others to agree with him. He thought that it was a sin to punish or kill anyone in the name of Christianity. And he thought that only members of the church should have to pay to support the church.

Roger Williams began speaking and writing about his ideas. He wrote a book arguing that it was wrong to punish people for having different beliefs. Then he declared that the European settlers were stealing land that belonged to the Indians. He said the king of England had no right to let people settle on land that was not his.

The Puritan leaders of the Massachusetts Bay Colony forced Roger Williams to leave the colony in sixteen thirty-six. He traveled south. He bought land from local Indians and started a city, Providence. The English Parliament gave him permission to establish a new colony, Rhode Island, with Providence as its capital. As a colony, Rhode Island accepted people of all religious beliefs, including Catholics, Quakers, Jews and even people who did not believe in God.

Roger Williams also believed that governments should have no connection to a church. This idea of separating church and state was new. Later it would become one of the most important of all the governing principles of American democracy.

Other colonies were started by people who left Massachusetts to seek land. One of those colonies was Connecticut. A group led by a Puritan minister named Thomas Hooker left Boston in sixteen thirty-six. They moved inland and settled near the Connecticut River. Others soon joined them.

Other groups from Massachusetts traveled north to find new homes. The king of England had given two friends a large piece of land in the north. The friends divided it. John Mason took what became the colony of New Hampshire. Ferdinando Gorges took the area that later became the state of Maine. Maine was never a colony -- it remained a part of Massachusetts until the United States was established in seventeen seventy-six.

The area that became New York State was settled by the Dutch. They called it New Netherland. Their home country, the Netherlands, was a great power, with colonies all over the world. A business called the Dutch West India Company owned most of the colonies.

The Dutch claimed American land because of explorations by Henry Hudson, an Englishman working for the Netherlands. The land the Dutch claimed was between the areas settled by the Puritans in the north and the Anglican tobacco farmers in the south.

The Dutch were not interested in settling the territory. Instead, they wanted to earn money. The Dutch West India Company built trading posts on the rivers claimed by the Netherlands. Indians brought animal skins to these posts for use in making goods for buyers back in Europe.

In sixteen twenty-six, the Dutch West India Company bought two islands from the local Indians. The islands were Manhattan and Long Island. The Dutch paid for Manhattan with goods worth only about twenty-four dollars.

The Dutch West India Company tried to find people to settle in America. But few Dutch wanted to leave Europe. So the colony welcomed people from other colonies, and other countries. These people built a town on Manhattan Island. They called it New Amsterdam. It was soon full of people who had arrived on ships from faraway places. Up until this time the population was mostly Dutch and British. But now one could hear as many as eighteen different languages spoken in New Amsterdam.

In sixteen fifty-five, the governor of New Netherland took control of a nearby Swedish colony on Delaware Bay. Nine years later, the English did the same to the Dutch. The English seized control of New Amsterdam and renamed it New York. That ended Dutch control of the territory that is now the states of New York, New Jersey and Delaware.

Most of the Dutch in New Amsterdam did not leave after it became New York. The English allowed everyone to stay. They let the Dutch have religious freedom. The Dutch were just not in control anymore.

The Duke of York owned the area now. He was the brother of King Charles the Second of England. The king gave some of the land near New York to two of his friends. Sir George Carteret and Lord John Berkeley established a colony. They called it New Jersey, after the English island where Carteret was born.

The two men wrote a plan of government for their colony. It created an assembly that represented the settlers. It provided for freedom of religion. Men could vote in New Jersey whatever their religion. Soon, people from all parts of Europe were living in New Jersey. Then King Charles took control of the area. He sent a royal governor to rule. But the colonists were still allowed to make their own laws through their elected assembly.

The king of England did the same in each colony he controlled. He collected taxes from the people who lived there, but allowed them to govern themselves.

One religious group that was not welcome in England was the Quakers. Quakers call themselves Friends. They believe that everyone has an inner light that leads them to God. Quakers believe they do not need a religious leader to tell them what is right. So, they had no clergy.

Quakers believe that all people are equal. The Quakers in England refused to recognize the king as more important than anyone else. They also refused to pay taxes to support the Anglican Church.

Quakers believe that killing is always wrong. So they would not fight even when they were forced to join the army. They also refused to promise their loyalty to a king or a government or a flag -- only to God.

For all these reasons, the English did not like the Quakers. Many Quakers wanted to leave England, but they were not welcome in most of the American colonies. One Quaker found a solution. His name was William Penn.

William Penn was not born a Quaker. He became one as a young man. His father was an Anglican, and a good friend of the king.

King Charles borrowed money from William's father. When his father died, William Penn asked that the debt be paid with land in America. In sixteen eighty-one, the king gave William Penn land which the King's Council named Pennsylvania, meaning Penn's woods in Latin.

The Quakers now had their own colony. William Penn said the colony should be a place where everyone could live by Quaker ideas.

That meant treating all people as equals and honoring all religions. It also meant that anyone could be elected as a leader. In most other colonies, people could believe in any religion, but they could not vote or hold office unless they were a member of the majority church. In Pennsylvania, all religions were equal.

The colonizing of America also spread to the south. The farming economies of these areas came to depend on slavery as a source of labor. It would also lead, two centuries later, to a civil war that nearly tore the nation apart. Slavery in the southern colonies will be our story next week.

You can find our series online with transcripts, MP3s, podcasts and pictures at 51voa.com. You can also follow us on Facebook and Twitter at VOA Learning English. I'm Steve Ember, inviting you to join us again next week for THE MAKING OF A NATION -- American history in VOA Special English.
Related Articles
go top