Putin Calls Up Reservists after Losses in Ukraine

Update Required To play the media you will need to either update your browser to a recent version or update your Flash plugin.
By Dan Novak
21 September 2022

It is the first mobilization of reservists since the second world war. The move quickly led to a sell-out of plane tickets leaving the country and reportedly brought some demonstrations.

Russia has struggled to replace its troops in Ukraine. The military has sought out volunteers and even reportedly brought prisoners to join the war. 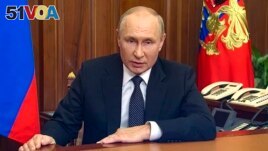 In his seven-minute televised speech to the nation, Putin claimed, without evidence, that NATO countries had threatened to use nuclear weapons against Russia. And he said Russia "also has various means of destruction." Putin added that he would use all available means to protect the Russian people.

Ukrainian President Volodymyr Zelenskyy told a German newspaper that he thought Putin would be unlikely to use nuclear weapons. But he noted that Putin's threat showed why it was important to stand up to him.

NATO Secretary-General Jens Stoltenberg denounced Putin's threat to use nuclear weapons as "dangerous and reckless." At a speech to the United Nations Wednesday, U.S. President Joe Biden called on all nations to speak out against Russia's "brutal, needless war."

The total number of reservists to be called up could be as high as 300,000, Russian officials said. However, the order offered few details, raising suspicions that the number could get larger.

The Vesna youth democratic opposition movement called for nationwide protests. The group said, "Thousands of Russian men -- our fathers, brothers and husbands -- will be thrown into the ... war. What will they be dying for? What will mothers and children be crying for?"

As protest calls spread online, Russian officials warned that organizing or participating in such actions could lead to up to 15 years in prison. The Russian state agency overseeing communication and media, also warned that websites would be blocked for publishing what they called "false information" about the mobilization.

The partial mobilization order came a day after Russian-controlled areas in eastern and southern Ukraine announced plans to hold votes on becoming parts of Russia. The votes will start Friday in the Luhansk, Kherson and partly Russian-controlled Zaporizhzhia and Donetsk areas.

Russia already considers Luhansk and Donetsk to be independent states. The two areas together make up the Donbas that Russia partially occupied in 2014.

Ukraine and the West consider all parts of Ukraine held by Russian forces to be illegally occupied. Russia now holds about 60 percent of Donetsk and had captured nearly all of Luhansk by July after months of fighting. The voting is all but certain to go Russia's way. And foreign leaders have described the votes as illegal.

The war in Ukraine has killed thousands of people, driven up food prices worldwide and caused energy costs to increase. It has also brought fears of a possible disaster at Europe's largest nuclear plant in Ukraine's now Russia-occupied southeast.

Russian defense minister Sergei Shoigu said 5,937 Russian soldiers have died in the conflict. That figure is far lower than Western estimates of tens of thousands.

reserve — n. a supply of something that is stored so that it can be used at a later time

ticket — n. a piece of paper that allows you to see a show, participate in an event, travel on a vehicle, etc.

desperation — n. a strong feeling of sadness, fear, and loss of hope

evade — v. to stay away from

bribe — n. something valuable that is given in order to get someone to do something