Putin Claims Russia Has New Weapons to Make Others 'Useless'

Update Required To play the media you will need to either update your browser to a recent version or update your Flash plugin.
By Mario Ritter
01 March, 2018

The claims by the Russian leader raise concerns that a new arms race could be taking place.

Putin spoke in a yearly speech before Russian officials and lawmakers in Moscow. The speech comes weeks before Russia's presidential election on March 18 in which Putin is seeking his fourth term as president.

Putin said Russia's military had tested a group of new strategic weapons aimed at defeating western defense systems. The Russian leader used videos shown on a large screen to present some of the weapons he discussed. 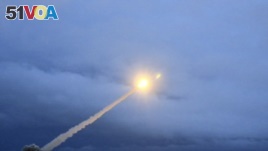 The Russian leader described the cruise missile as being able to travel a "practically unlimited" distance. And he added that it could defeat antimissile systems by moving unpredictably.

Another weapon described was a nuclear-powered underwater drone able to travel at great depths under the sea. Putin said the device could target aircraft carriers and would avoid measures to stop it by traveling 10 times faster than any other ship.

Other weapons systems discussed included an intercontinental ballistic missile, or ICBM, able to travel at 20 times the speed of sound. Putin said a hypersonic air-launched missile, called Kinzhal, with a range of 2000 kilometers was already deployed.

And Putin said Russia had tested its Sarmat ICBM that could strike anywhere in the world carrying many nuclear warheads.

He said the new weapons had made the missile defenses of the North Atlantic Treaty Organization (NATO) "useless."

Republican Senator Thom Tillis of North Carolina told VOA, "I view Mr. Putin like I view any murderer or criminal. When they say something, they're probably lying, but you have to take it seriously."

And Democratic Senator Ben Cardin of Maryland added that "Countries that boast about their military — there's a reason why, because they know that their capacities are far less than what they claim to have."

Senator Dick Durbin is a leader of the Senate Democrats. He said, "Some of the things that Putin said today in Moscow are frightening, because they suggest advancements by the Russians when it comes to lethal technology." Durbin added that he wants "to sit down with our people in the Pentagon and the intelligence community to measure whether this is just bluster or a serious threat."

Strains on the economy

Putin set a goal of cutting the number of Russian poor people in half. Government numbers show that nearly 14 percent of Russians live below the poverty line and real incomes decreased in 2017 for a fourth year. The poverty rate is nearly four percent higher than it was in 2010.

Russia has struggled economically as it faces international sanctions for its seizure of the Crimean Peninsula in 2014 and low prices for oil. Putin also called for improvements to the nation's health care system and building needed infrastructure projects.

Mario Ritter adapted this story for VOA Learning English based on AP and VOA news reports. Hai Do was the editor.

strategic –n. related to a long-term strategy or plan

drone –n. a vehicle that does not have people on it but is controlled remotely

intercontinental ballistic missile (ICBM) –n. a powerful rocket that travels into space to reach a distant target on earth

hypersonic –adj. many times faster than the speed of sound (which is about 1200 kilometers and hour)

lethal –adj. having the ability to kill, deadly

bluster –n. words that are loud and aggressive