Update Required To play the media you will need to either update your browser to a recent version or update your Flash plugin.
By VOA
16 June, 2015

The leader spoke at the opening of the Russian Defense Ministry's Army-2015 international military exhibition near Moscow on Tuesday. Mr. Putin said the new missiles "will be able to overcome any, even the most technologically advanced anti-missile defense systems."

Mr. Putin's comments came during high tensions between Russia and NATO countries over the conflict in eastern Ukraine. NATO chief Jens Stoltenberg told reporters in Belgium that Mr. Putin's comments confirmed "the pattern and behavior of Russia over quite a period of time."

Kurdish forces in northern Syria say they have full control of a border town believed to be a path in from Turkey for Islamic State (IS) fighters and supplies.

Anti-Islamic State militias raised their flags over Tal Abyad on Tuesday. Reporters observed the flag-raising from the Turkish side of the border. 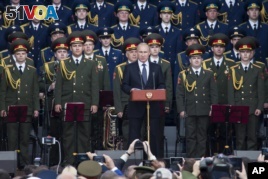 The Pentagon on Tuesday said Tal Abyad remains contested, but anti-IS forces are very close to closing the border crossing.

Pakistan says its troops crossed the border into Afghanistan Tuesday to rescue a severely wounded Afghan soldier. The report says the soldier was hurt in a gunfight with "terrorists."

The cross-border action took place about 600 meters inside Afghanistan, along the border with Pakistan's tribal territory of Bajur. Pakistani military media reports the Afghan soldier is receiving treatment in a hospital in the Bajur town of Khar.

An Egyptian court on Tuesday confirmed the death sentence of former president Mohamed Morsi. He was sentenced last month along with 100 others in connection with a 2011 mass prison escape.

United Nations Secretary-General Ban Ki-moon says he is "deeply concerned" by Egypt's decision. The UN chief's office released a statement Tuesday saying the UN is against punishment of death in all cases.

exhibition – n. a public show of something

contest – v. to struggle or fight for or against something

mass – adj. involving, affecting, or designed for many people