Update Required To play the media you will need to either update your browser to a recent version or update your Flash plugin.
By Olivia Liu
06 July, 2017


Four Arab nations led by Egypt and Saudi Arabia say Qatar is "not serious" in its response to their demands.

The Arab countries also include the United Arab Emirates and Bahrain.

The gulf countries cut diplomatic ties with Qatar on June 5 and banned goods and travel to the country. They said Qatar supports terrorism and maintains close tie with Iran. 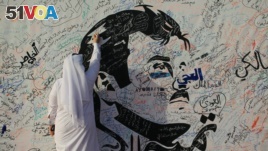 A man writes on a painting depicting Qatar's Emir Sheikh Tamim bin Hamad Al-Thani in Doha, Qatar, July 2, 2017. The artwork has attracted comments of support from residents amid a diplomatic crisis between Qatar and neighboring Arab countries.

The four nations issued a list of 13 demands on June 22.

The demands include closing a Turkish military base being constructed in Qatar, shutting down Al Jazeera news network and distancing itself from Iran among other things.

Mohammed bin Abdulrahman al-Thani is Qatar's Foreign Minister. He said the list is mainly about shutting down free speech. He said it violates the country's self-rule and interferes with its affairs.

Egypt's Foreign Minister Sameh Shukri said Qatar's response to the 13-point list of demands was "negative on the whole." He added that Qatar "does not realize the gravity of the situation."

The announcement followed a Wednesday meeting of foreign ministers from the four Arab nations in Cairo. The ministers did not say what their next steps would be but plan to meet again in Bahrain.

In a statement, the White House said Trump called on all parties in the dispute to "negotiate constructively" and to "stop terrorist financing and discredit extremist ideology."

Amin Saikal is the Director of the Center for Arab and Islamic Studies at the Australian National University. He said Saudi Arabia and its allies do not like Qatar's support of and ties to the Al Jazeera television network. He said the network "has broken a number of taboos by criticizing some of the monarchies and corrupt systems in the Arab countries." He said "Qataris cannot really respond positively to these sorts of demands."

Saikal said the conflict with its neighbors might push Qatar closer to both Turkey and Iran. If that were to happen, the demands would be counterproductive.

Both Turkey and Iran compete with Saudi Arabia for influence in the area.

Olivia Liu adapted this story for Learning English with material from Victor Beattie, the Associated Press and Reuters. Hai Do was the editor.

affairs – n. things related to the business of state

taboos – n. things that are forbidden