Qatar’s Modern Hospital for Falcons Only

Update Required To play the media you will need to either update your browser to a recent version or update your Flash plugin.
By John Russell
27 March 2022


The Souq Waqif medical center sits in the historic center of Doha, the capital of Qatar.

It appears to be a hospital with the latest equipment for medical care. Workers move about while beeping sounds and blinking lights come out of operating rooms. Specialists look at X-rays as doctors prepare for surgery.

There is just one thing: The rooms are filled with falcons. 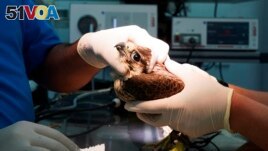 In the small, wealthy country of Qatar, falcons are among the nation's most prized residents. Long respected across the Arabian Peninsula for their hunting abilities, falcons are now used to show a person's wealth or social standing.

Although less common now than in ancient times, the art of falconry is still passed down from one generation to the next in Qatar and other Persian Gulf states. In recent years, groups that teach the sport have started up across the area.

Falcons compete in an increasing number of races and beauty events. The finest falcons sell for at least a few thousand dollars and Qataris are willing to pay to keep them healthy.

Dr. Ikdam Al Karkhi is Souq Waqif hospital director. He told The Associated Press, "The establishment of the hospital was to support the hobby and heritage of raising falcons." He added, "Keeping them alive and well is an essential duty."

Public hospitals like Souq Waqif offer care to about 30,000 sick and wounded birds a year. The hospital is often full of owners and trainers bringing their birds in for check-ups, medical tests, feather replacements, and surgeries.

The falcon's hunt may be a respected tradition, but it is also difficult and dangerous work. At times, the cornered animal fights back, injures the falcon, and damages its wings.

Each of a falcon's feathers is important for its ability to fly, necessitating careful feather replacement after fights. Doctors pull from a collection of feathers to find one that perfectly matches the wounded bird. "If these damaged feathers remain, it can cause loss or reduction of the bird's fitness," Al Karkhi said. "They must be treated."

Hamad Al Mehshadi runs events for falconry. He took his falcon for a regular medical checkup at the center, saying "If a person is neglecting their bird, it's a huge problem."

Lujain Jo reported on this story for the Associated Press. John Russell adapted it for VOA Learning English.

beep -- n. a short usually high-pitched sound (as from a horn or an electronic device) that serves as a signal or warning

blink -- v. to go on and off repeatedly

surgery -- n. medical treatment (as of disease, injury, or physical abnormality) that involves cutting into the body usually to expose internal parts

resident -- n. someone who lives in a particular place

falconry -- n. the sport of hunting with hawks

match -- v. to be the same or suitable to one another

neglect -- v. to fail to take care of or to give attention to (someone or something)